A Drone You Can Eat?

They’re Nicknamed the “OPEC of Rainforests”

The “OPEC of rainforests.” That could be the nickname of a new group of nations—Brazil, Indonesia, and the Democratic Republic of the Congo—who are in talks to coordinate their conservation efforts. The Guardian reports that the three countries contain 52 percent of the world’s remaining primary rainforests, which absorb CO2 and keep it from warming the atmosphere. But if they are destroyed, those areas could become greenhouse gas emitters. The group could make joint proposals on carbon markets and finance to encourage developed countries to fund the conservation efforts of poorer ones. And it’s possible similar nations like Peru and Cambodia would join the strategic alliance. 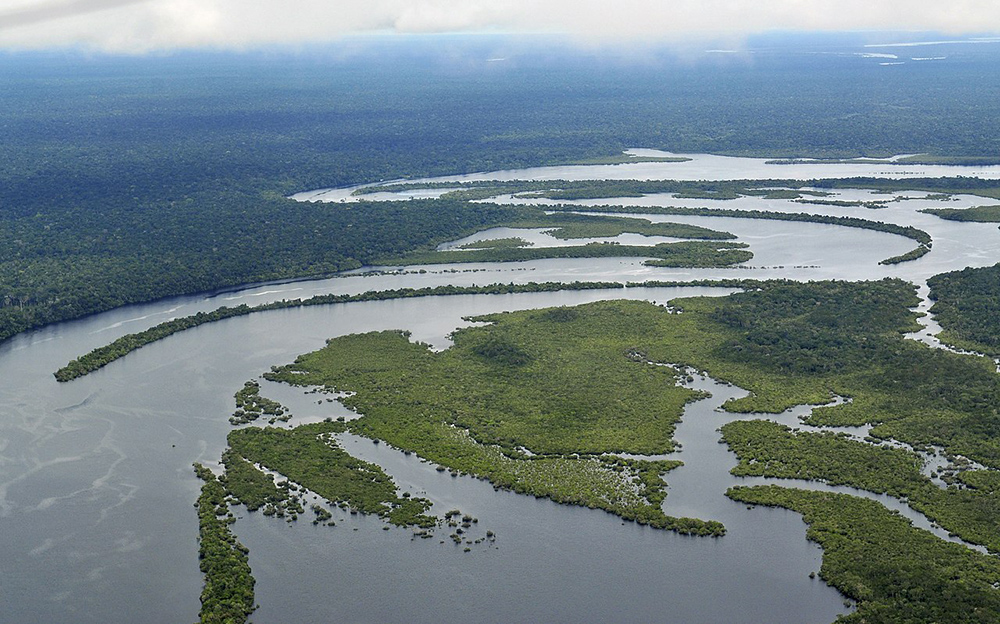 Aerial view of the Amazon Rainforest, near Manaus, the capital of the Brazilian state of Amazonas | Credit: Neil Palmer (CIAT)

Primary rainforests are pristine and untouched by human activities. The Amazon, the Congo Basin, and the Borneo and Sumatra forests have been threatened by logging and have been converted into cattle grazing pastureland and farmland for soybeans.

The newly elected president of Brazil, Luiz Inácio Lula da Silva, known as Lula, pledged in the first speech after his victory to achieve zero deforestation in the Amazon. His predecessor, Jair Bolsonaro, promoted development, and deforestation climbed to a 15-year-high. It will not be an easy task for Lula. Bolsonaro has many supporters in Brazil's Congress and he won eight of ten municipalities with the largest deforestation rates in the Amazon.

The New York Times reported that Lula’s advisers were coordinating with Indonesia and the Democratic Republic of the Congo months before the election to pressure wealthy nations to finance protection of the rainforests.

The news comes as the UN COP27 talks have begun in Egypt, after a year of disasters, including floods, fires, and heatwaves. The war in Ukraine has caused an energy crisis and threatens global food security, according to the Financial Times. Fiscal problems in rich countries challenge their willingness to help poorer nations stop burning fossil fuels. For the first time, the issue of “loss and damage” could be on the agenda at the COP27 conference to provide money to developing countries for handling the losses already being faced from climate change instead of just funds to prepare for the future.

Graphite Needed for Electric Vehicles, but U.S. Mining May Be Problematic

The electric vehicle market could be in trouble if we don’t get more of a certain mineral—and we’re not talking lithium. It’s graphite and it's needed for EV batteries. The U.S. government has listed it as a critical mineral to the country’s economy and security. Graphite makes up 28 percent of car batteries by weight and most of it has come from China. As Marketplace reports, graphite has not been mined in the U.S for more than 30 years. 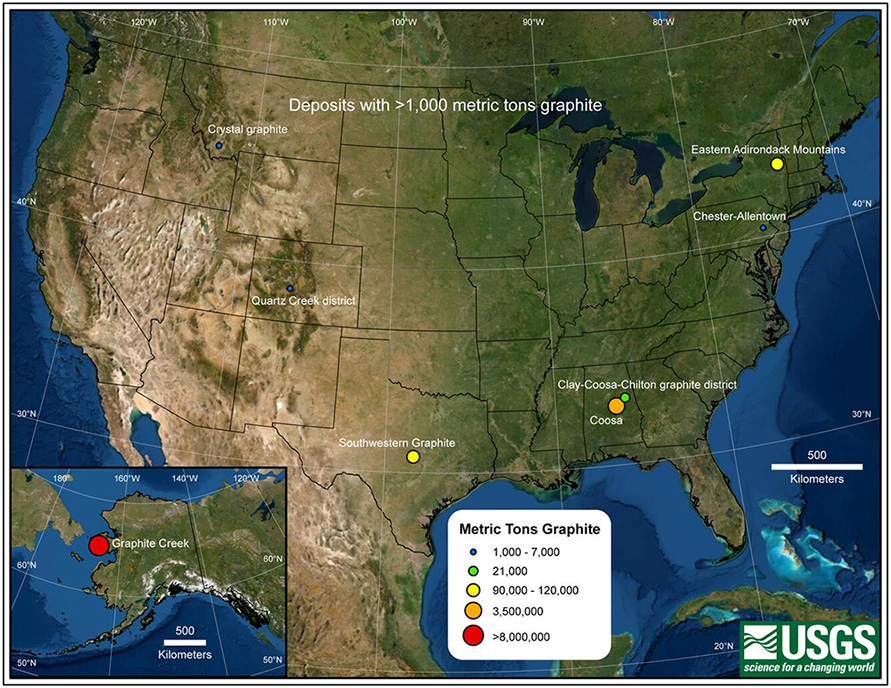 Graphite locations in U.S. Mineral Deposit Database. This data release contains sites with more than 1,000 metric tons of contained graphite resource and/or past graphite production. This is approximately three percent of the average annual U.S. consumption of graphite between 2016 and 2020. | Credit: The U.S.  Geological  Survey  (USGS)

The need for graphite is challenging because, while electric vehicles are necessary to combat climate change, mining for the mineral can create environmental problems. President Biden’s recently passed climate and tax bill, known as the Inflation Reduction Act, includes a credit for EVs but only as long as their batteries are made with minerals extracted from the U.S. or from a country in a free-trade agreement with the U.S. The president has used the Defense Production Act to fund exploration for graphite mining and for other minerals.

According to the USGS, the largest known source of graphite in the country is the Graphite Creek deposit in Alaska. But as E&E News reports there is no road access to the deposit and mining could impact polar bears and rare species. Another site in Alabama used to be mined up to the 1950s, but environmentalists say it includes two waterways with fragile ecosystems and perhaps a dozen threatened or endangered species. Meanwhile, the price of graphite has climbed nearly one third in the past year.

Soybeans are a versatile crop, used in everything from foods and cosmetics to plastics and biofuels. And now, using research from Iowa State University, the legumes could be on our roads. 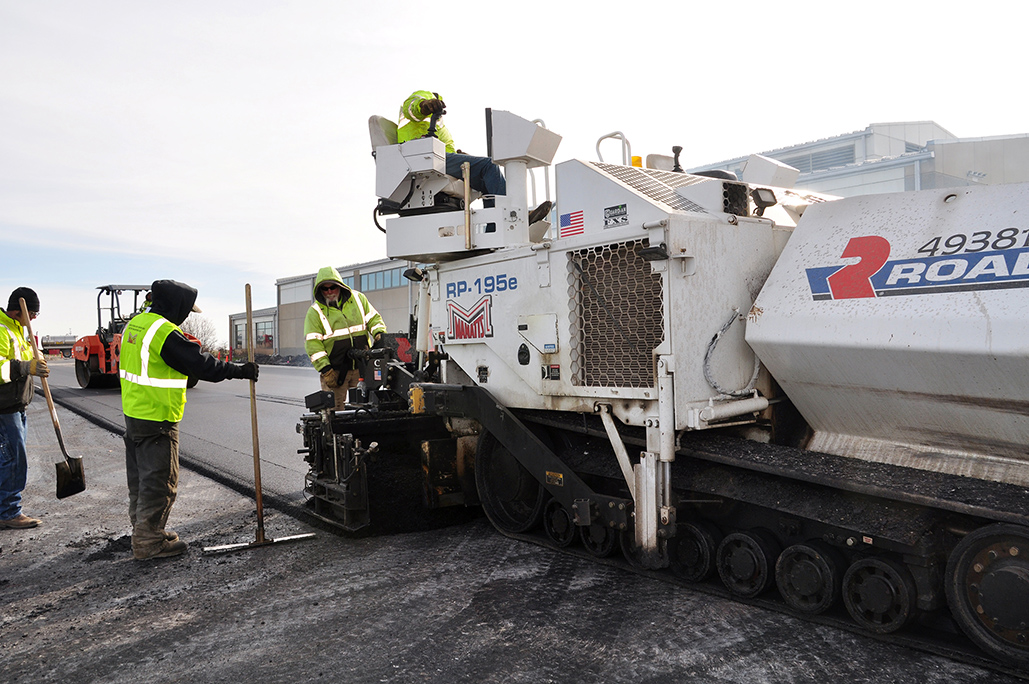 Traditionally, when roads get paved, they use a petroleum-based polymer called polybutadiene to bind the aggregate and keep it from cracking. The polymer is not only in short supply but also carcinogenic. But after some trial and error, researchers were able to substitute soybean oil for the petroleum polymer, and it performed just as well, and could also use 100 percent recycled asphalt, keeping old road waste out of landfills and reducing cost.

Using their process, after recycled asphalt is put on a road, it’s sprayed with the soybean oil emulsion, and then a compactor squishes it down into the final surface. It’s a renewable resource—contrary to common hot mix asphalt pavements, which require a lot of heat energy to compress.

Riding on the success of their roadway experimentation, the team launched a startup company called SoyLei Innovations, which has a line of products, including one that can repair damaged asphalt roof shingles and make them last longer.

Stranded in the Wilderness? Rice Cakes to the Rescue!

The potential for you to get your groceries, a cup of coffee, or an Amazon package delivered by drone is increasing, as a number of companies are running trials. But what if you were stranded out in the wilderness, waiting to be rescued, and needed food and water. Most drones don’t have enough battery life to reach remote locations. 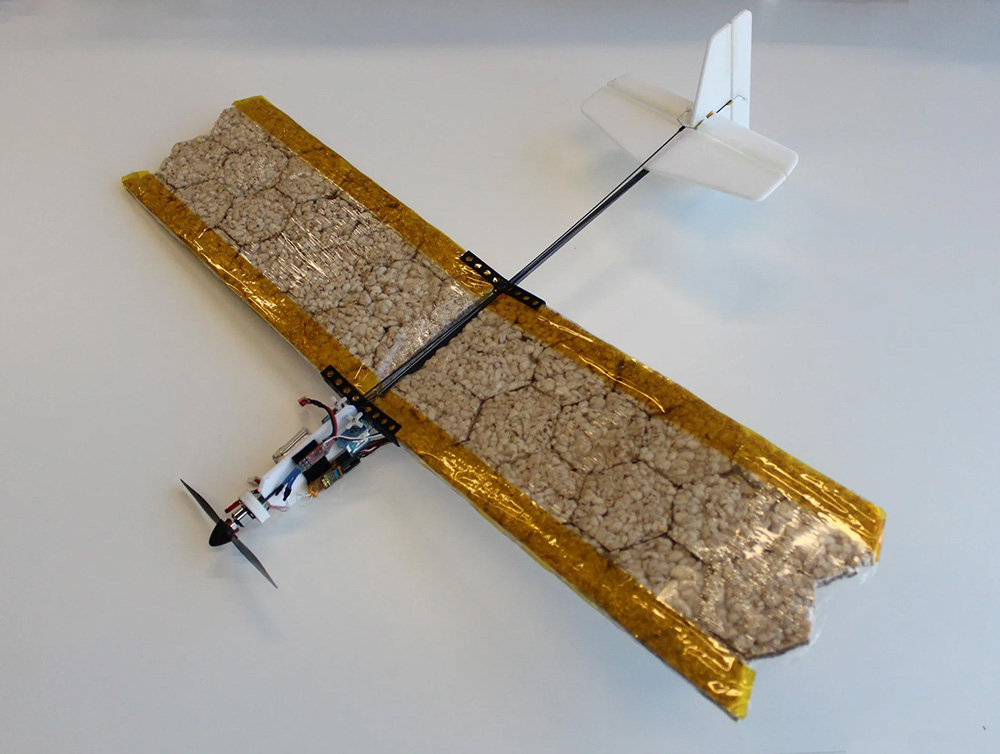 Fear not! Help could be on the way from a drone you could...eat. As the tech magazine IEEE Spectrum reports, researchers from the Swiss Federal Institute of Technology Lausanne (EPFL) have developed an unmanned aerial vehicle (UAV) with wings made of rice cakes. Part of the challenge with delivery drones is that adding weight can limit their range. So, the team figured, why not make the deliverable, so to speak, part of the aircraft. They chose rice cakes because of their similarities to expanded polypropylene (EPP) foam that’s commonly used in drones because it’s strong and lightweight.

The researchers cut store-bought rice cakes, which are typically round, into hexagons and glued them together with gelatin to form the wings. Once dry, they were wrapped with removable plastic to keep them from disintegrating in wet or humid conditions. The prototype zips along at 33 feet per second, and the researchers estimate it could carry 80 grams of water in addition to its edible wings, which themselves serve up 300 calories, about a typical breakfast.

The team plans to experiment with larger wings with higher nutritional value, and potentially making more of the drone edible. So, in case they’re listening, rice cakes are a bit bland. Perhaps the next drone could add a honey glaze or some chocolate drizzle?

The paper “Towards Edible Drones for Rescue Missions: Design and Flight of Nutritional Wings,” by Bokeon Kwak, Jun Shintake, Lu Zhang, and Dario Floreano was presented At the IEEE/RSJ International Conference on Intelligent Robots and Systems (IROS) conference in Kyoto last week.