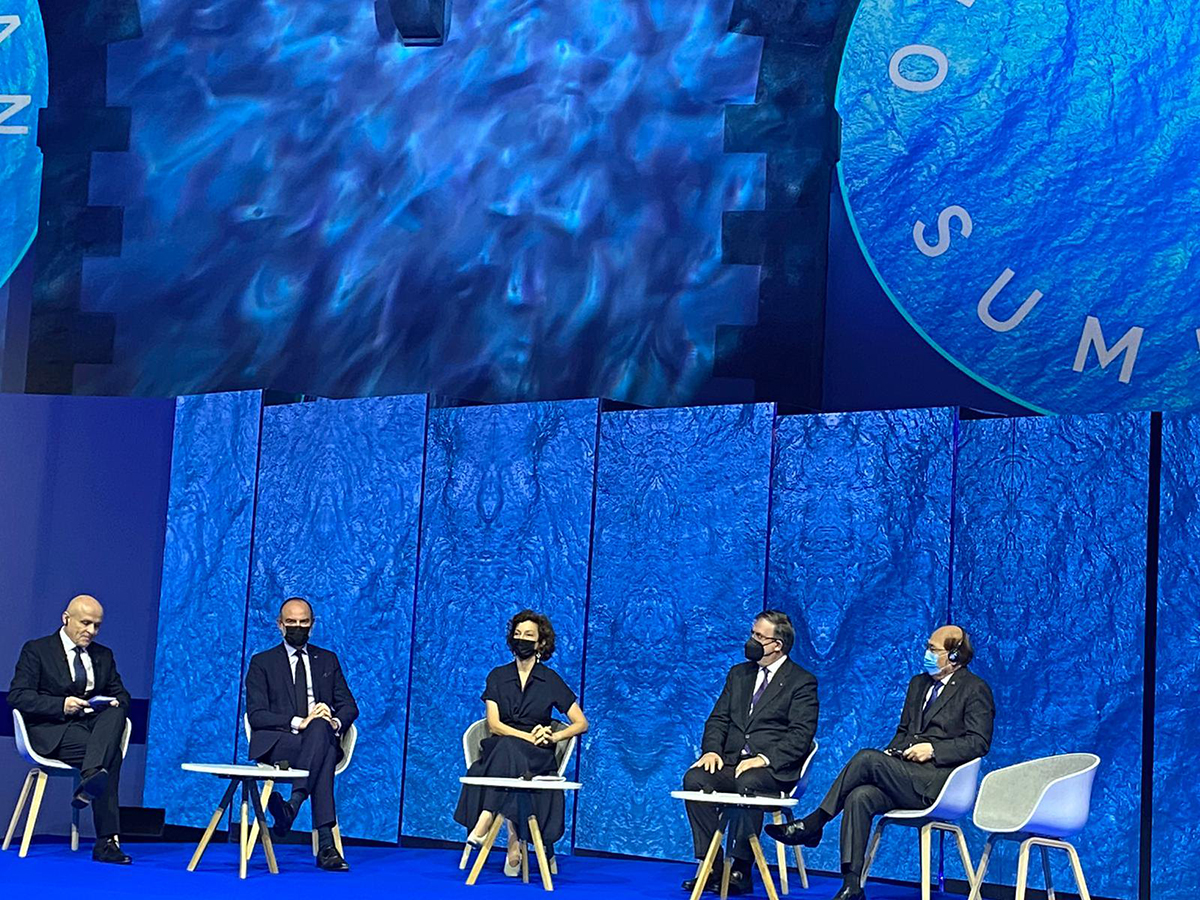 IMO Secretary-General Kitack Lim participates at the High Level Session of the One Planet Summit For The Ocean in Brest, France | Credit: International Maritime Organization.

There was progress in some areas. To preserve biodiversity, a coalition led by the European Union will pursue an agreement extending protections to the high seas, which constitute 95 percent of the ocean. European shipping companies said they would establish new targets to cut carbon emissions and underwater noise. The U.S. said it would support talks toward an agreement on plastic pollution, joining the EU and ten other countries that had already committed. According to the National Academies of Sciences Engineering and Medicine, about eight million metric tons of plastic waste enters the world's ocean each year—the equivalent of dumping a garbage truck of plastic waste into the ocean every minute.

The Washington Post reports that 14 nations committed to strengthen efforts to combat illegal fishing, including better policing in ports and at sea. John Kerry, the U.S. Special Envoy for Climate, said that some fishing operations are indistinguishable from major criminal enterprises, using appalling labor practices, laundering money, and destroying the good efforts of fishers who try to live by the rules.

The conference started just days after an environmental group, Sea Shepherd, released horrifying images of 100,000 dead fish floating in the Bay of Biscay on the southwest coast of France, which were allegedly caught and thrown off the world’s second largest trawler. The group suspects the fish were “bycatch”—fish not wanted or that cannot be sold. EU fishing rules ban the practice, according to Deutsche Welle. These types of trawlers drag kilometer-length nets and process the fish through onboard factories, which environmental groups strongly criticize. Special Envoy Kerry said at the conference that the nets are depleting fish stocks, which results in throwing away two-thirds of what is caught.

One-Third Living in the U.S. Have Pesticide in Their Bodies

About one in three people in the U.S. have been found to have detectable levels of a toxic herbicide in their bodies that has been linked to birth defects, reproductive problems, and leukemia in children, among other health issues. A new study from George Washington University shows that the chemical called 2,4-D has seen a resurgence among farmers since weeds have become resistant to glyphosate—the compound commonly used in Roundup®. The National Pesticide Information Center says there are more than one thousand products with 2,4-D that are sold in the United States, including Weed B-Gone™ made by Ortho®. 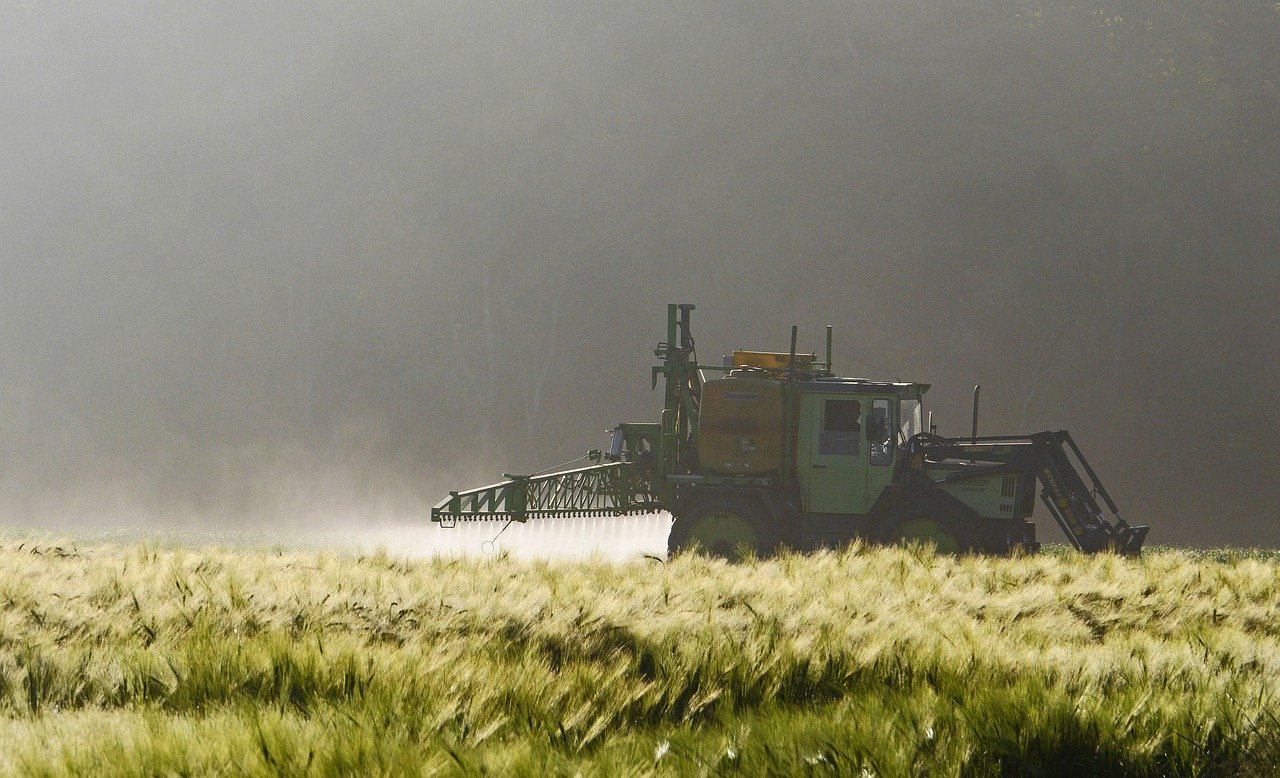 Among all those tested, children aged six to 11 and women of childbearing age showed substantially higher levels of 2,4-D in their urine than other groups. The researchers explain that children can be exposed to the chemical by being barefoot on lawns treated with the weedkiller or if they put their hands in their mouths after playing outside. The general population is exposed to 2,4-D through eating foods and drinking water containing its residue. The Natural Resources Defense Council says the chemical has been detected by the EPA in drinking water and groundwater. Agent Orange, which was used by the U.S. military in Vietnam to clear leaves and vegetation, contained the toxin 2,4-D.

According to the Guardian, high levels of exposure have been associated with health problems, but little is understood about low-level exposure. However, the EPA says that products containing the chemical are safe if label directions are followed. The lead author of the research said that more study must be done to measure the risk of the chemical to human health. The use of 2,4-D increased nearly 70 percent in the eight years ending in 2020, and is likely to rise even more.

The study was published in the journal Environmental Health.

A “First-in-the-Nation” Solar Project Could Also Save Water

Last year, a study by the University of California showed that, if the state covered all its 4,000 miles of canals with solar panels, it could save water while making electricity. According to the study, evaporation would be cut by as much as 82 percent, saving about 63 billion gallons of water annually—about the same amount required to irrigate 50,000 acres of farmland or meet the residential needs of more than two million people. The researchers also showed covering the canals with solar installations could generate about one-sixth of the state’s current installed capacity, about half the projected new capacity needed to meet California’s goal of cutting greenhouse gas emissions by 40 percent by 2030. 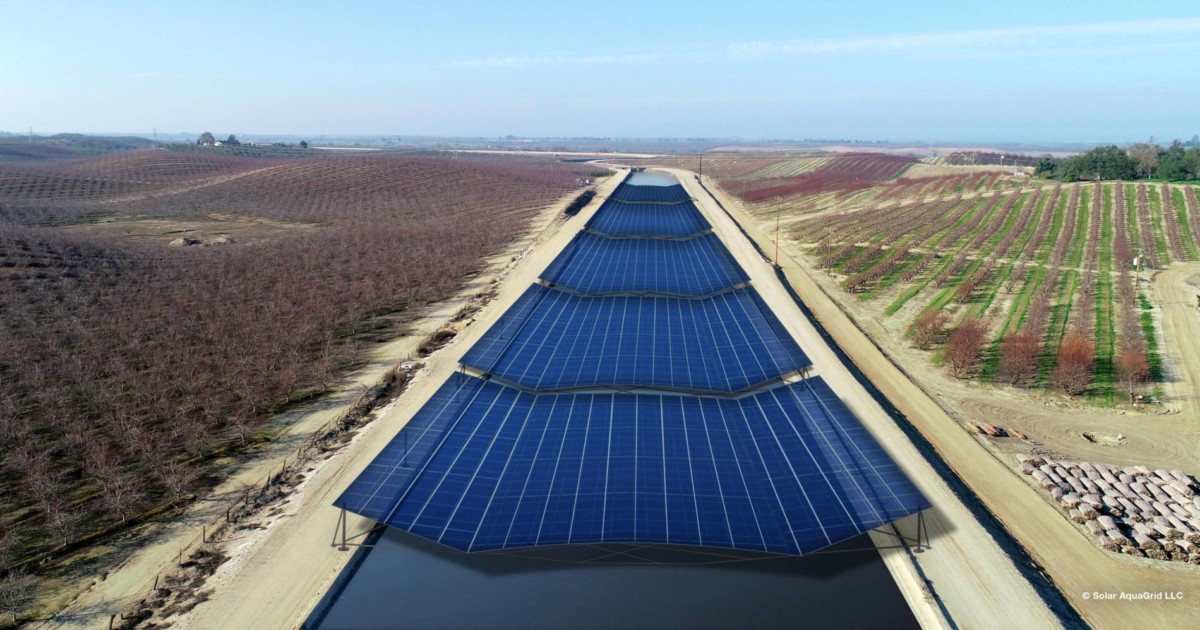 That research is now being put to the test. The California Department of Water Resources has awarded $20 million to the Turlock Irrigation District (TID) in California’s Central Valley to pilot an installation of solar panels on its canals—the first such experiment in the country. Called Project Nexus for its combined water and energy benefits, the development, a public-private-academic partnership among TID, the Department of Water Resources (DWR), Solar AquaGrid, and the University of California, Merced, will place an estimated 8,500 feet of solar panels on three sections of its canals. In addition to decreasing evaporation and generating renewable energy, they expect to improve water quality and lower maintenance by reducing the growth of aquatic weeds.

The water will keep the panels cool and enhance their efficiency. Also, by using canals for renewable energy, it avoids converting large tracts of land into solar farms to meet the state’s climate goals.

Project Nexus will break ground this fall and take two years to complete. Additionally, energy storage will be installed to study how storage facilities can support the local electric grid when solar generation is suboptimal due to cloud cover. If successful, it could be replicated on other canals.

Swamp-Dwelling Dinosaurs Got Sick and Were Miserable

Dinosaurs were just like us. They got sick and were miserable. That was probably the case with “Dolly,” a long-necked sauropod, who lived in present-day Montana, which 150 million years ago in the Late Jurassic epoch, was a warm, humid coastal river system. Cary Woodruff, a paleontologist at the Great Plains Dinosaur Museum in Malta, Montana, was recently examining Dolly’s fossils, which were unearthed in the state more than 30 years ago, when he noticed some unusual broccoli-like protrusions in several of her neck bones. 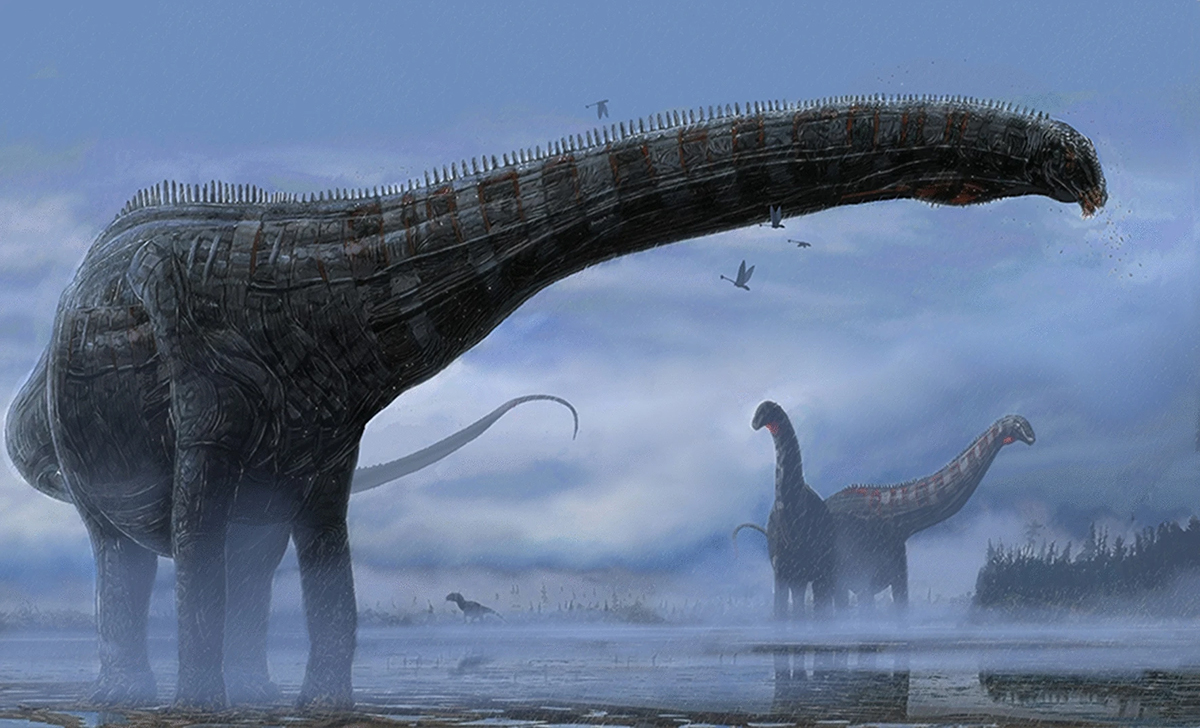 Hypothetical life restoration of Dolly. Note that the pulmonary disease infecting this animal would not been externally evident, but the probable pneumonia-like outward symptoms would have included coughing, labored breathing, nasal discharge, fever, and weight loss among others. | Artwork by and copyright of Corbin Rainbolt. / Woodruff et al., doi: 10.1038/s41598-022-05761-3.

But he wasn’t sure what to make of them. So, as the Guardian reports, he posted photos to social media and researchers quickly replied that the lesions were similar to growths found in modern-day birds and reptiles when they had respiratory infections similar to aspergillosis, caused by a fungus.

Just like birds today, sauropods had a series of air sacs near and in their bones that connected to their lungs. Woodruff and his team concluded that Dolly probably got airsacculitis, which is common today in birds but never known to occur in dinosaurs. He said Dolly would have looked sick—coughing, sneezing, headache, fever, with bouts of diarrhea. Whether she succumbed to the illness or fell victim to a predator in her weakened state, we’ll never know.

Birds that get airsacculitis today are treated with antibiotics, but Dolly was 18 meters long—the length of a tractor trailer—so if a pill were available back in the Late Jurassic, proportionately, it probably would have needed to be the size of a toaster oven to comfort her.

The study was published in the journal Scientific Reports.