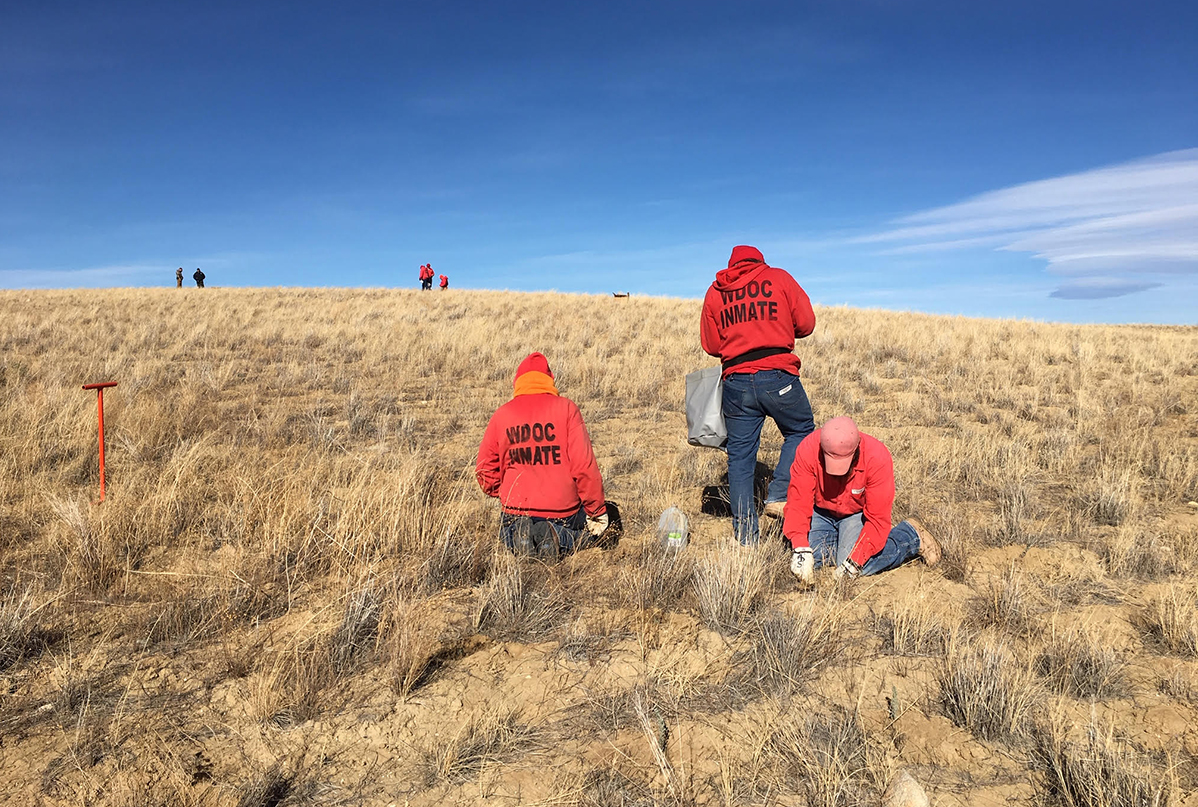 Inmates plant sagebrush to restore an area that was mined for uranium. | Credit: Dionné Mejía, Institute for Applied Ecology

How Inmates Are Saving an Iconic American Landscape—and Themselves

Forest fires have made headlines as the climate warms, but less attention is paid to the growing number of blazes burning across sagebrush territory. Some of these vital landscapes might never recover but for the help they’re receiving from an unexpected source—incarcerated men and women who are seeing a much brighter future thanks to the underappreciated shrubs.
By Frani Halperin, Executive Producer

HANNA, Wyo.—For decades, TV and movie Westerns have depicted cowboys driving cattle through sagebrush country—a territory portrayed as inhospitable and dotted with low-growing, grey-green shrubs as far as the eye can see. Even today, a drive down a highway in the West gives the impression it’s endless and monotonous terrain with little value—you know, “flyover country.”

But Gina Clingerman won’t abide anyone calling sagebrush habitat a wasteland. “This is a national treasure that people don't realize is here.” Gina is the project manager for the Bureau of Land Management (BLM) Abandoned Mines Lands program in Wyoming. I’m walking with her on a very windy day through rolling hills in the southern part of the state, about 100 miles north of the Colorado-Wyoming border, where a wildland fire last year torched more than 14,000 acres of so-called sagebrush steppe, a landscape that she says is in peril.

Sagebrush habitats are “being destroyed piece by piece,” she says. The ecosystem, which can be found in 13 states west of the Mississippi, is now fragmented by roads and urbanization and being sliced and diced by extractive industries like oil and gas and mining. “Five acres there...two acres here...That starts to add up over time.”

Current estimates are that nearly half of sagebrush ecosystems, the largest interconnected habitat type in America, is gone because of human activities—including from devastating fires, which are increasing with droughts and warming temperatures due to climate change. As the native sagebrush disappear, invasive species like cheatgrass are only too happy to move in. Brought by European settlers in the 1800s, cheatgrass is highly flammable and puts large swaths of sagebrush at risk for wildlands fires, which, when burned, make room for more cheatgrass. It’s a vicious cycle that’s playing out more and more across the West.

Gina estimates that the sagebrush lost in the blaze area we’re walking through near the small town of Hanna, were probably 100 to 150 years old. But now, she says, they’re “Dead. Gone, forever.” That’s an irreplaceable loss for the pronghorn, mule deer, elk, and other wildlife that depend on this ecosystem. The “sagebrush sea,” as it’s known, is not only a vital part of the heritage and culture of the West, it’s also home to over 350 species of wildlife—some of which live nowhere else on Earth, like the greater sage-grouse, a keystone species of sagebrush habitat.

Destruction of sagebrush habitat is also a loss of an asset in combatting climate change because of the vast amounts of carbon the plants store. Sagebrush, which can be from two to 12 feet tall, have roots that extend nearly 13 feet below the surface. The Resilient and Connected Lands mapping platform developed by The Nature Conservancy shows that 77 percent of Wyoming's carbon is in non-forested systems—its rangelands and grasslands—and store 1.1 billion metric tons. Once a sagebrush ecosystem is ravaged, it could take up to one hundred years for them—and their carbon sequestering abilities—to fully come back.

The BLM wants to restore these habitats, in large part due to dwindling numbers of greater sage-grouse—birds best known for their spectacular courtship dances in the spring and whose populations have declined 80 percent over the last 50 years. The birds hide from predators under the plant's branches and survive by eating its leaves in the winter. Gina says just scattering seeds on the ground doesn’t really work to establish plants—though they’ve tried. And so today, on this fall morning among blackened nubs of dead sagebrush on this fire-charred hillside, I’m seeing little yellow cages about 12 inches tall, inside which Gina and her colleagues have hand planted seedlings, one by one. Unlike other plants, sagebrush can be planted in the fall to take advantage of snowfall to put down roots. From seed to stem, it’s arduous and time-consuming, but they got help from a surprising source—inmates from the Wyoming correctional system.

The Sagebrush in Prisons Project

Levi George is incarcerated at the Wyoming Honor Farm, a minimum-security prison in Riverton, Wyoming. Every day, starting last April, he and three other inmates made nurturing seedlings the focus of their day. Through a program called the Sagebrush in Prisons Project, they successfully raised sagebrush plants from seed. 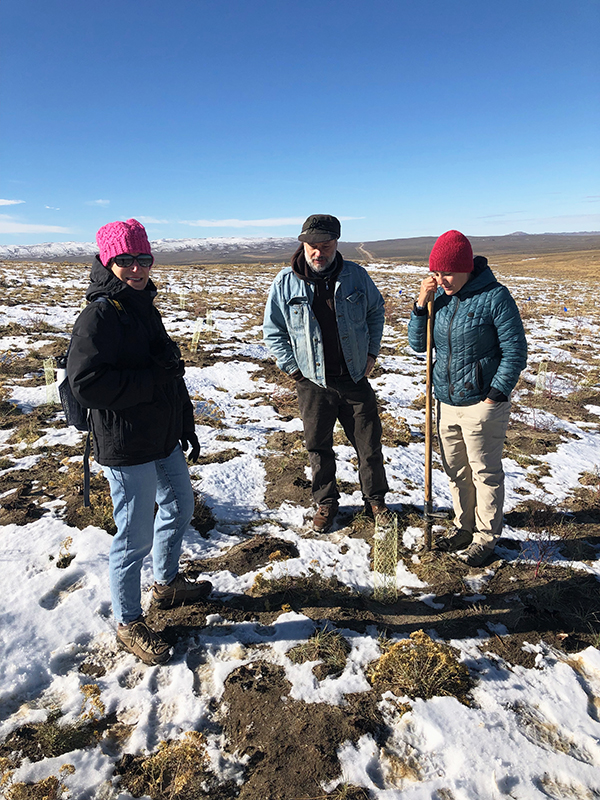 “We mixed the dirt and the soil and made sure the pH levels are where they need to be. And then, we do the seedlings, and then throughout the year, we water and fertilize them.” Levi explains, adding, “Right now the plants are acclimating to the weather outside, so they'll be ready for the winter when they plant them.”

Levi says he’s never grown a plant from seed and found the experience therapeutic. “It's nice to see something grow from nothing.” He adds that working with plants also offered him a place of refuge. “In prison, just like anywhere, everybody is not going to get along. So being able to be away from everyone else and be with the plants and nurture them and watch them grow, to me, it was very soothing.”

The plants the inmates grew in six months, which are going into the burn area, are now about three inches tall. If they were grown from seeds in the wild it would have taken five years to get to the same height. Also, seeds scattered on the ground have less than a three percent survival rate compared to the 40 to 70 percent viability of the seedlings. The idea of the prison program is to give sagebrush restoration a jump start—and offer inmates a fresh start.

The Sagebrush in Prisons program was launched by the Institute for Applied Ecology (IAE) in 2014 and was inspired by a program by The Evergreen State College in Washington that demonstrated the need for quality programming in prisons. IAE also knew of a need for native plants to restore lands following wildfires, so they talked with their partners at BLM to find a way to bring the two concepts together, and the Sagebrush in Prisons Project was born.

Stacy Moore, ecological educator with the Institute, which does habitat restoration, research, and ecological education, says the first prison they worked with was the Snake River Correctional Institution in Ontario, Oregon. Prison officials were skeptical at first about dedicating resources toward growing a plant that most dismissed as “a weed that grows everywhere,” but its value to inmates became swiftly obvious. The staff told Stacy that not only were they sold on the idea, but they also wanted to double production the next year. "So, that's what we did, and the next year we went from one prison to five prisons. Then, other prisons saw the benefits and they put up their hand to be involved as well.” The nonprofit now works with 11 prisons in Wyoming, Oregon, Idaho, Nevada, and California.

Stacy will be the first to say that, if the only goal were to grow sagebrush, the nonprofit could just do it on their own. But the ability to benefit adults in custody far outweighed the constraints that working with prison populations presented, such as background checks, unanticipated lockdowns, and lately, COVID-19 restrictions. “These inmates are soon going to be out in the community, they're going to be your neighbors, they're going to be the ones you're standing in line next to at the grocery store. So, we want to give them as many skills as we can before they are released.” 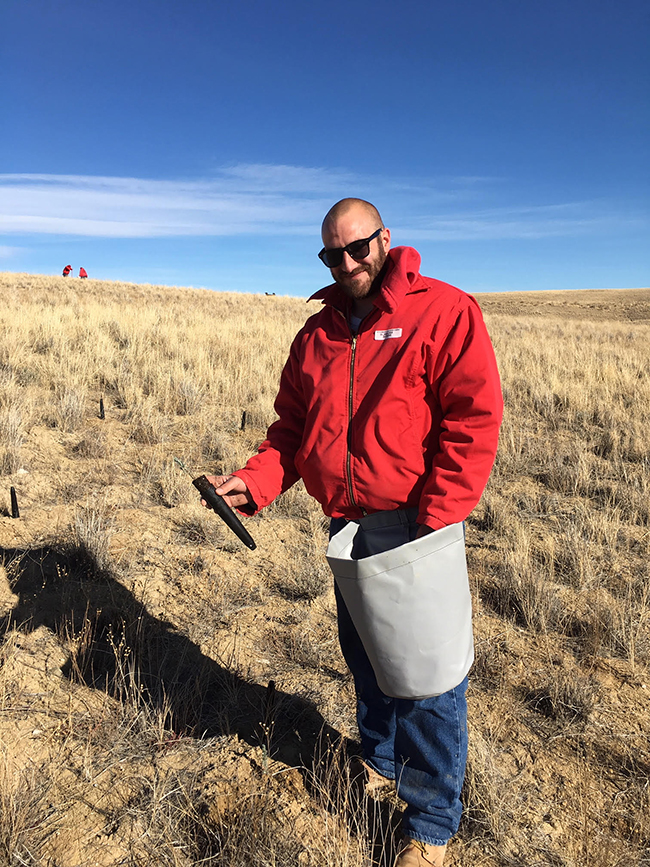 Inmates planted approximately 7,000 sagebrush seedlings at the Bull Rush Uranium Mine in the Gas Hills, as a part of the Wyoming Abandoned Mine Lands Native Plants Project. The Gas Hills area in the central part of the state that was extensively disturbed by uranium mining from the 1930s to the 1970s. Credit: Dionné Mejía, Institute for Applied Ecology

The Institute brings in experts at each prison to teach inmates—and staff who, also seem to eager to learn—about a range of topics related to sagebrush ecosystems. At the end of the season, each participant receives a certificate that lists the skills they've acquired. Stacy says they believe that program is enriching the inmates’ lives—giving them education, horticulture skills, and helping them with pro-social behaviors.

The program is so popular with inmates that currently there are not enough spots for all who want to join. Perhaps it’s because of the calming effect that being around sagebrush affords. Stacy hears from prison officers that the program has helped reduce violence at facilities after the inmates have been working with the plants. The inmates tell her they like the smell of the sagebrush (Artemisia tridentata)—which is not the same as culinary sage (Salvia officinalis) used in cooking. Some inmates say nurturing the seedlings has lowered their blood pressure.

But the benefit can go beyond reducing tensions in a unit. Officers report that the program has brought inmates back from the brink. One example is an inmate in Idaho, who was so depressed that he wouldn’t go outside. But after he became involved in the program, it not only raised his spirts, but he also became the lead team member. Prison staff said the program "brought him out of his shell and saved his life.”

The experience convinced Levi, who is due to be released within days from the Wyoming Honor Farm, to apply to work for the BLM. “I plan on still continuing to work with them after my release here and try to help other people that's been in my situation when they get out to have somewhere to start from because it's hard for felons to get employment sometimes.”

Studies show programs like these are reducing recidivism because inmates reenter society with tangible skills—and feeling valued. They also express how important it is to feel that they’re giving back to the community. “It's just knowing that you had a part of something that you're giving life to that's going to hopefully sustain other life form(s).” Levi says, trying to put into words what the program meant to him. “It's a big deal.”

It’s also a big deal for the newly planted sagebrush. They’ll thrive thanks to the help of the inmates, who nurtured the seedlings, and in that process, grew themselves. 💧

Before you leave... H2O Radio is a 501(c)(3) nonprofit supported by our listeners. A donation of any amount will help keep us on the beat, reporting on water and environmental issues that matter to you. Thank you.