Powering Your Car with a Lobster

Another wake-up call is sounding. Will the world continue sleepwalking? That’s the warning of UN Secretary-General António Guterres who said, “Today, it is Pakistan. Tomorrow, it could be your country.” 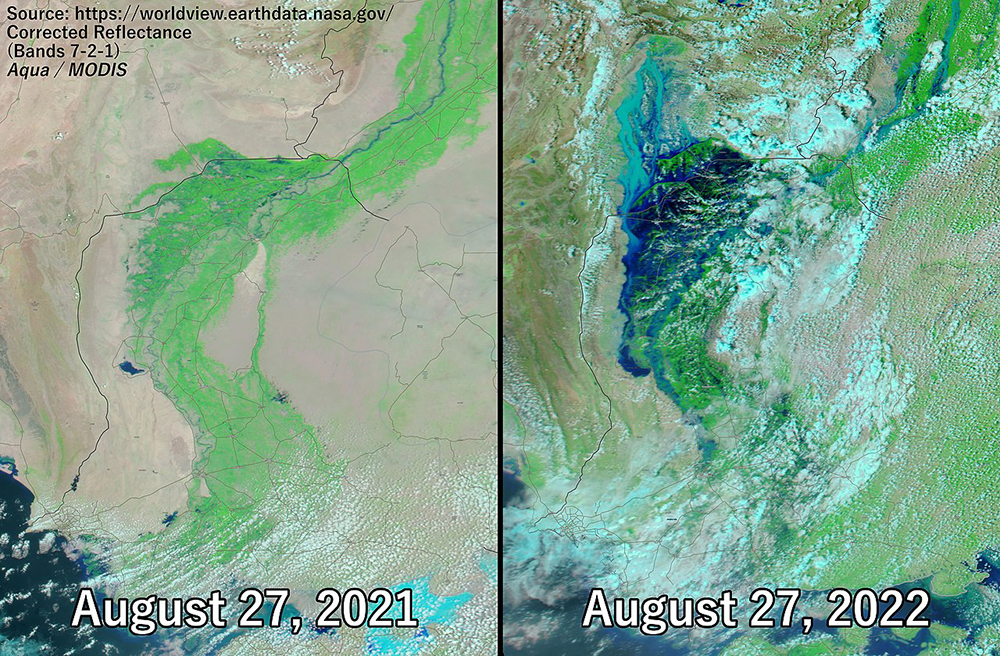 Pakistan has suffered devastating flooding with one-third of the country underwater, according to the country’s climate minister, Sherry Rehman, who spoke to the BBC. According to NASA, latest reports show more than 1,200 people have died, 700,000 livestock have been killed, and two million acres of crops and orchards have been lost. It’s likely these numbers are underestimates, as more is learned in the coming weeks.

Along parts of the country’s largest river, the Indus, plains areas have been turned into seas, after some districts received five times the average rainfall during July and August.

The links to climate change are apparent. A warmer atmosphere and rising sea temperatures lead to more evaporation. Because the air holds more water, it can result in the intense monsoons that Pakistan has suffered. Making matters worse, Pakistan has 7,000 glaciers—the most outside polar regions—and recent extreme heat created lakes from melting ice which then burst. The World Health Organization warns that this crisis is aggravating malnutrition and causing outbreaks of malaria, diarrhea, polio, and other diseases.

People Have Warned About the Crisis in Jackson, Mississippi, for Years

The current emergency in Jackson, Mississippi, the state’s capital, where tens of thousands have been without clean water, shouldn’t be a surprise to anyone. Residents of the city and local officials have been warning of issues for years. People in Jackson, which is over 80 percent Black, lack water for drinking, cooking, bathing, and flushing toilets, after flooding from heavy rains exacerbated problems at already struggling water plants. 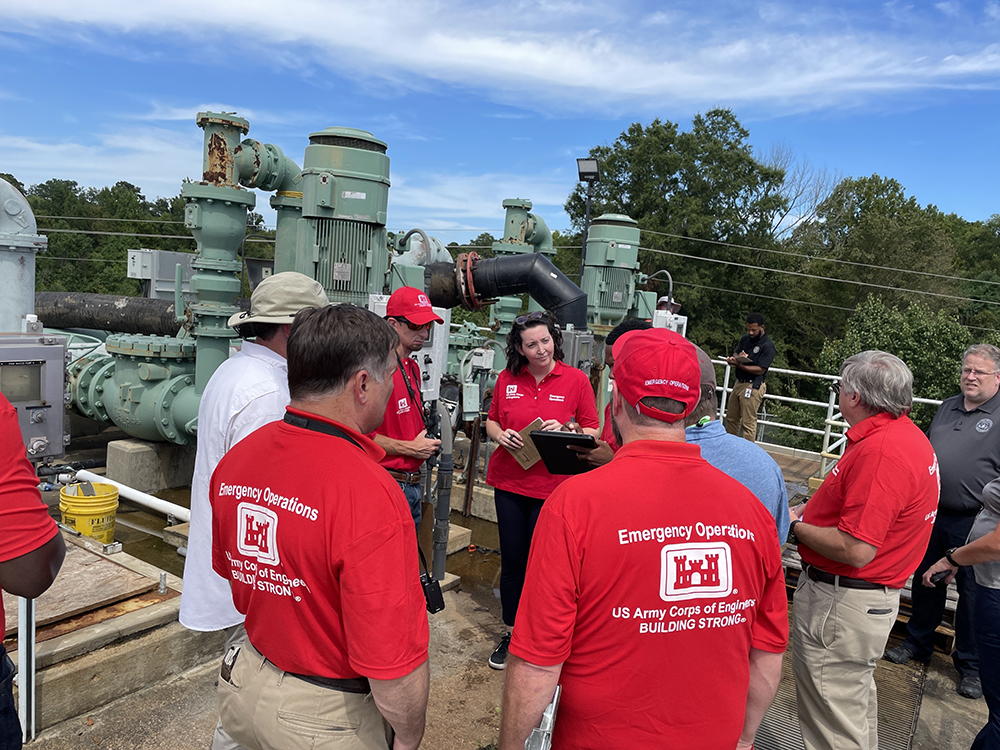 U.S. Army Corps of Engineers (USACE) Vicksburg District engineers were on site at the O.B. Curtis Water Treatment Plan, Sept. 1, 2022, after receiving a FEMA ESF#3 mission assignment to perform initial assessments of the pumping system, wastewater infrastructure, and electrical system. The U.S. Army Corps of Engineers in coordination with FEMA is committed to working with our federal, state, and local partners to provide assistance to the citizens and City of Jackson, Mississippi. | Credit: USACE photo by Sabrina Dalton

Because of the crisis, schools switched to virtual classes, and for now, the National Guard has been deployed to distribution sites, where long lines of cars wait to pick up plastic water bottles, many of which are ending up on streets or going to landfills. One day last week, more than one million bottles were handed out.

A student at Jackson State University told NBC that he was hospitalized after showering, and that a doctor told him he had been exposed to bacteria. One resident told the Washington Post that he hadn’t had running water for about a year and a half. Customers still have to keep paying their bills even though they can’t use the water.

The city has old and leaking pipes, malfunctions at treatment plants—and not enough money to fix them. Residents and activists accuse Mississippi’s Republican-controlled and largely white legislature of repeatedly thwarting efforts to upgrade Jackson’s sewer and water system. The legislature has passed a bill that would fund nearly $500 million for infrastructure—short of the $2 billion the city needs, according to the Clarion Ledger—and it requires Jackson to come up with matching dollars of which it has only about five percent.

Once water pressure is restored to Jackson, there are worries the aging and brittle pipes will burst.

Fifty Years Ago, Ads Said to “Put a Tiger in Your Tank,” but Now, Maybe It's a Crab

The world is transitioning to a greener future, as more renewable energy sources like wind and solar come online and demand for electric vehicles increases. Unfortunately, much clean tech relies on batteries that are not sustainably sourced and can’t be recycled, which is the case for lithium mining that can have a significant environmental and social cost. Also, chemicals in conventional batteries take thousands of years to degrade and are subject to exploding or catching fire. 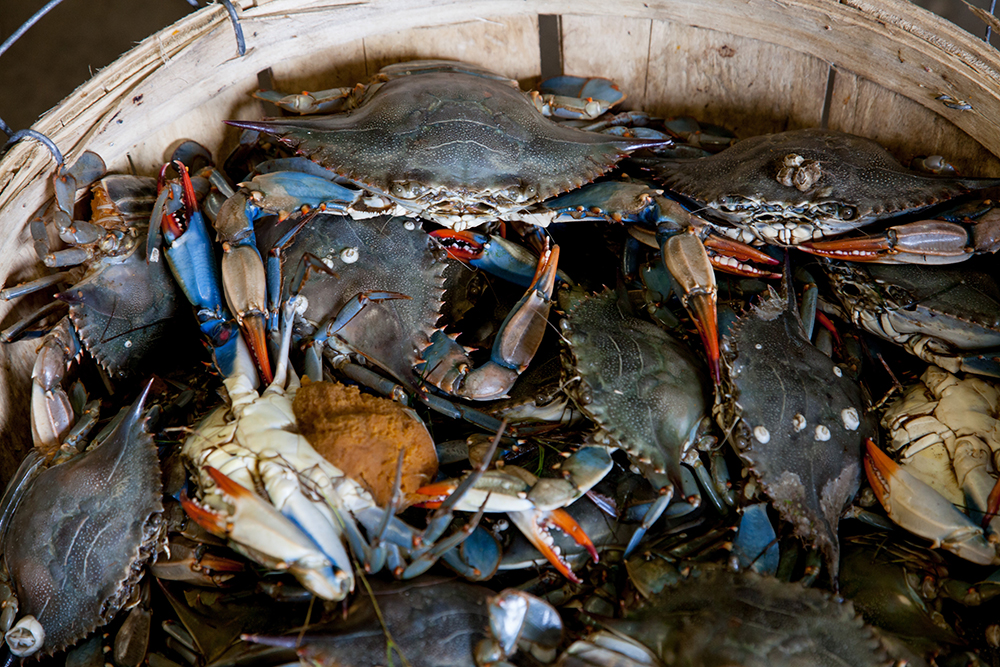 Crustaceans like crabs, shrimp, and lobsters, have a fiber in their exoskeletons called chitin to keep their shells hard. Chitin can made into chitosan, which researchers used to create a new electrolyte for a rechargeable battery. | Credit: Mark Stebnick via Pexels

But a sustainable solution could be at your favorite seafood restaurant. Researchers at the University of Maryland are using a fiber called chitosan from lobster, shrimp, and crab shell waste as an electrolyte in a zinc-based rechargeable battery. Crustaceans have chitin in their exoskeletons from which chitosan is derived.

Electrolytes are liquids, pastes, or gels that move charged molecules or ions between the positive and negative sides of a battery. A chitosan electrolyte biodegrades in months and leaves behind the metal component, in this case zinc, which can be easily recycled.

The study’s lead author, Liangbing Hu, director of the University of Maryland's Center for Materials Innovation, said their zinc and chitosan prototype remained almost entirely energy efficient after 400 hours of use. So, one day shrimp could help store energy generated by wind and solar or a lobster shell could run your car—a far cry from the days when gas stations advertised to put a “tiger in your tank.”

The paper was published in the journal Matter.

Staples like corn, wheat, and rice have sustained people for centuries, but global warming is putting those crops at risk, as rising temperatures, extreme weather events, and droughts affect yields. There is, however, a climate-proof food that might be arriving on your dinner plate and it’s perhaps one you’ve never heard of—breadfruit. 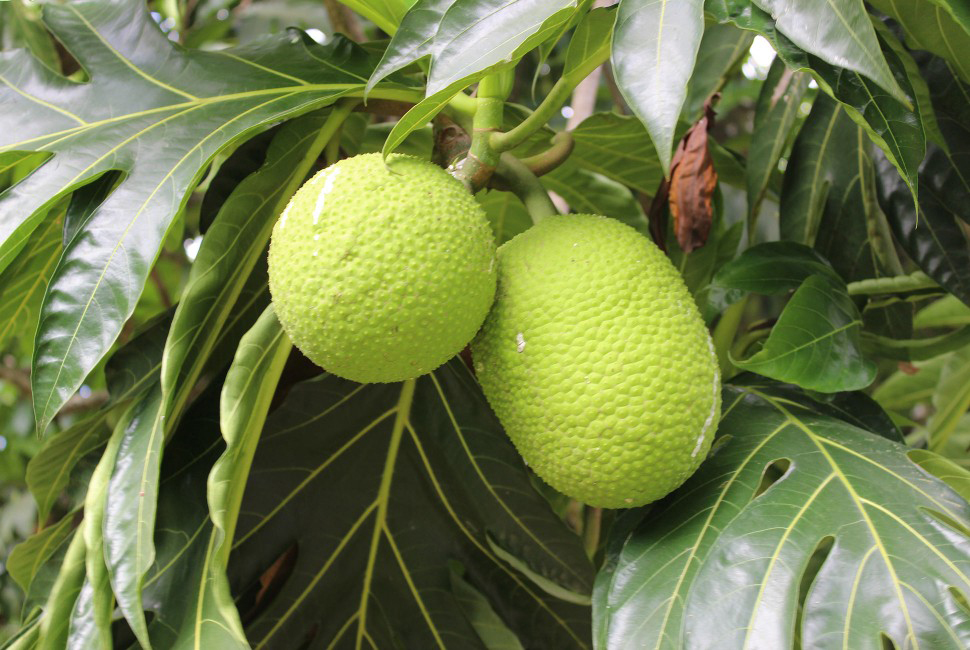 Breadfruit is closely related to jackfruit, and is high in fiber, vitamins and minerals. | Credit: Nyree Zerega, Negaunee Institute for Plant Conservation Science and Action at the Chicago Botanic Garden

Sometimes called a “tree potato” for its starchy consistency, breadfruit can be as big as a melon and are native to the South Pacific, where for thousands of years, they’ve been steamed, fried, roasted, and even made into flour. According to the National Tropical Botanical Garden, breadfruit are a good source of protein, fiber, vitamins, and minerals, and once established, the trees can withstand heat and drought and don’t require much maintenance. Also, unlike crops that need to be replanted every year, breadfruit trees hum along sequestering carbon throughout their lifetime.

Given these superpowers, researchers at Northwestern University wanted to know—would climate change eventually come for the breadfruit tree? Probably not—the trees look to be resilient. The team modeled two potential climate scenarios—one with high greenhouse-gas emissions and the other in which emissions stabilize. In both scenarios, they found areas suitable for cultivation remained mostly unaffected—decreasing by a modest 4.4 to 4.5 percent. And they also found that new growing areas might open up—particularly in sub-Saharan Africa, which could supply a stable food source for that region.

Breadfruit trees provide more than food security. They can improve soil conditions and watersheds and give shelter to bees, birds, and bats.

The study was published in the journal PLOS Climate.