This “Lightning” Could Power the Grid

As the water crisis in the Colorado River Basin keeps getting worse, the federal government warned two months ago that unless the seven states that rely on its water agreed on reductions by mid-August, it would impose cutbacks. However, last week the deadline passed, and the federal officials, well, they didn’t do much. The river basin that serves farmers and 40 million people, including those living in Los Angeles, Phoenix, and Denver, is in a long-term drought that has been ratcheted up by climate change. The Southwest is now warmer and drier in conditions called aridification. 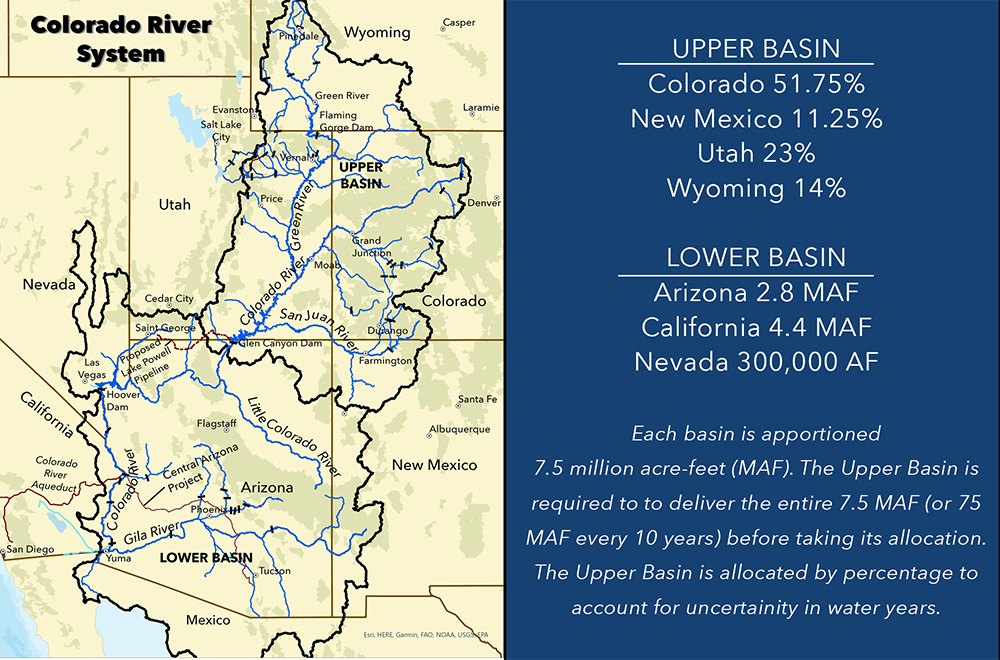 The water level at Lake Powell, which is made by Glen Canyon Dam in northern Arizona, may become so low that there could be nothing flowing below it to the Grand Canyon and then onto Lake Mead, the largest reservoir in the U.S. The Bureau of Reclamation had urged the seven basin states to plan to cut as much four million acre-feet of water by August 15, or it would take control.

When the states didn’t come up with an agreement, the Bureau didn’t impose any drastic reductions once the deadline passed. Instead, the agency announced some additional small cutbacks to Arizona, Nevada, and Mexico—nothing near the amount it had advised by the August deadline.

As the Denver Post reports, there is a divide between the Upper Basin states of Colorado, Utah, Wyoming, and New Mexico, and the Lower Basin states of California, Arizona, and Nevada. Those in the Upper Basin say the system is out of balance because the Lower Basin—California in particular—is taking much more than their agreed upon share, and that the Lower Basin must learn to live with less. Others say the Colorado River Basin as a whole must share in cuts and conservation to save the way of life for all in the system.

The situation remains uncertain, which according to some, is the fault of the federal government. Andy Mueller, general manager of the Colorado River Water Conservation District told the Denver Post that the Bureau of Reclamation’s actions showed a failure of leadership and were extremely frustrating. Gary Wockner of the advocacy organization, Save the Colorado, said in a release that the Bureau of Reclamation’s announcement is vague and doesn’t change much of anything. Rhett Larson, a water law professor at Arizona State University told the Denver Post that an agreement over cutbacks was needed yesterday, and every day that passes, the problem gets worse and harder to solve.

Meanwhile, people in large parts of Southern California will have to suspend outdoor watering for about two weeks next month, as officials shut down a major pipeline from the Colorado River in order to repair a leak.

So-called “Forever” Chemicals May Not Last Forever After All

Compounds called “forever chemicals” might not last “forever” after a new study shows they can be destroyed. PFAS compounds—perfluoroalkyl and polyfluoroalkyl substances—have been used in cosmetics, non-stick cookware, firefighting foam, and water-repellent fabrics, and they don’t break down naturally. They accumulate in the body and are found nearly everywhere and in everyone, posing a threat to human health by increasing risks of cancer, liver damage, and low birth weights. 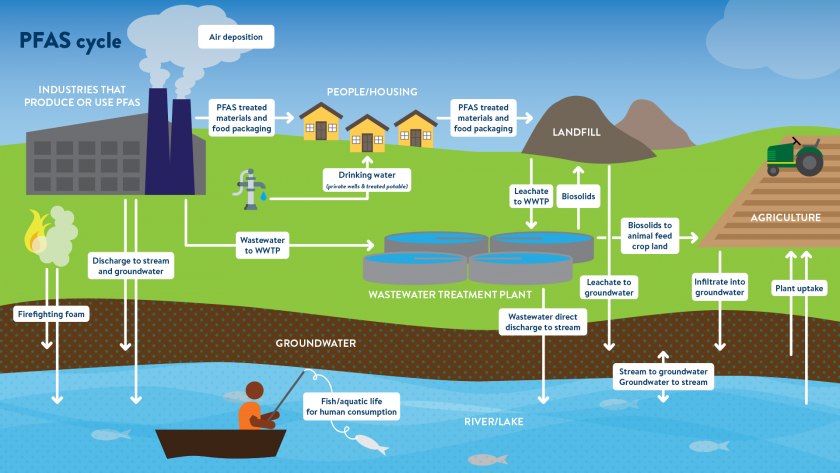 However, scientists at Northwestern University have found an inexpensive, simple, and effective way to destroy PFAS compounds by mixing them with two cheap reagents and bringing them to a low boil. The process deconstructed the chemicals, leaving only benign parts in just a matter of hours.

There have been successful efforts to filter PFAS compounds out of water but few methods to dispose of them after their removal. The authors say that their technique could provide that solution. There are thousands of types of PFAS compounds, and this study, while promising, only looked at ten of them. Next, the team will try their method on the others.

Through photosynthesis, plants convert sunlight into food. More specifically, they use water, carbon dioxide from the air, and the sun’s energy to create sugars as fuel to grow. Taking inspiration from nature, researchers at the University of Cambridge have developed floating artificial leaves that can generate clean fuels, which one day could be a sustainable alternative to oil and gas. 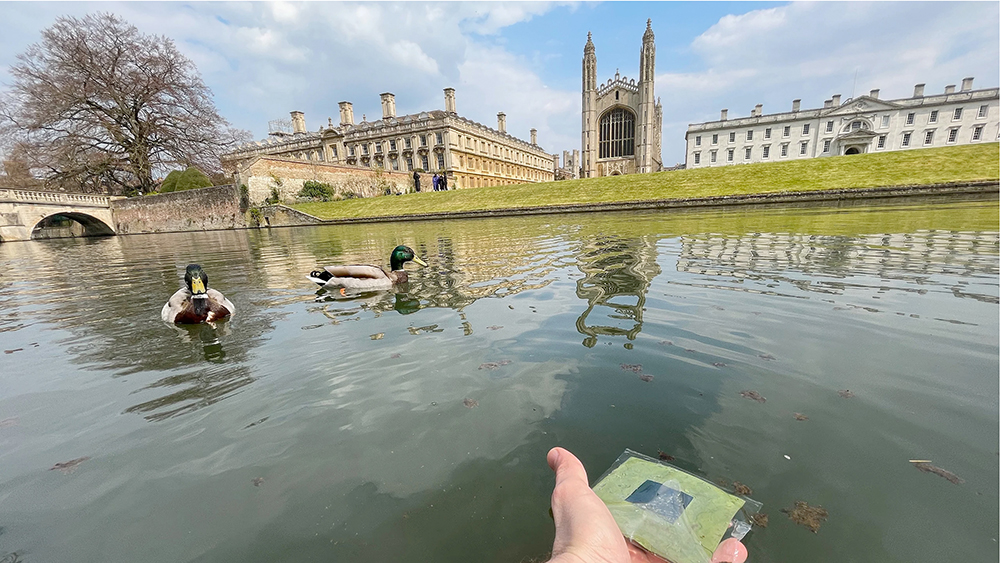 Ducks on the River Cam approach the artificial leaf. | Credit: University of Cambridge

Unlike solar panels on a roof that use photovoltaics to generate electricity, their floating artificial leaves are made from a flexible plastic coated with lead perovskite, a kind of crystal that can capture energy from sunlight, to produce hydrogen or reduce CO2 to syngas.

Scientists have been working on solar fuel technologies for decades, but because the leaves could drift on lakes or oceans, they might be a better option than biofuels, which are made from non-food crops that take up a lot of space on land and use significant amounts of water to grow. Potentially, fuels from the floating leaves at sea could also help decarbonize cargo ships, which run on heavy oil and release significant amounts of greenhouse gases into the atmosphere.

The researchers say more work is needed to scale up their three-inch-square prototype but it’s an exciting development that could help turn over a new leaf in clean fuel technology.

The results are reported in the journal Nature.

Speaking of clean fuel technology, could your next car be a home power plant? If it’s Ford’s new F-150® Lightning™ electric truck it might. The F-150 Lightning EV with its large battery was designed to power a home for up to ten days during outages through vehicle-to-home technology, or V2H, using its bidirectional, or two-way charging technology.

And now through a pilot program with Duke Energy in North Carolina, the truck might also supply the grid by offering reduced lease payments to 100 customers who allow the utility to tap into their EVs’ batteries during peak demand. Known as vehicle-to-grid integration or V2G, the program would pull energy three times a month in winter and summer when demand is highest and once per month for the rest of the year.

Not only would the pilot program support the grid but also provide research around V2G technology, which as CleanTechnica writes, could be a massive boost to our renewable energy transition if utilities didn’t have to invest millions in infrastructure but could instead harness electricity from our cars.

Duke Energy and Ford Motor Co. are also planning a pilot program in Florida that will focus on homes with rooftop solar. Both programs would launch in 2023 once approved by regulators.