Without a Plumbing Upgrade, There Could Be a Dead Pool on the Colorado River

Can you imagine the Grand Canyon with barely any water flowing through it? A new report from conservation groups, the Glen Canyon Institute, the Utah Rivers Council, and the Great Basin Water Network, says that, as the Southwest becomes more arid, levels at Lake Powell on the Colorado River could be too low for water to pass through outlets in Glen Canyon Dam—something that could happen if there are two more dry winters. 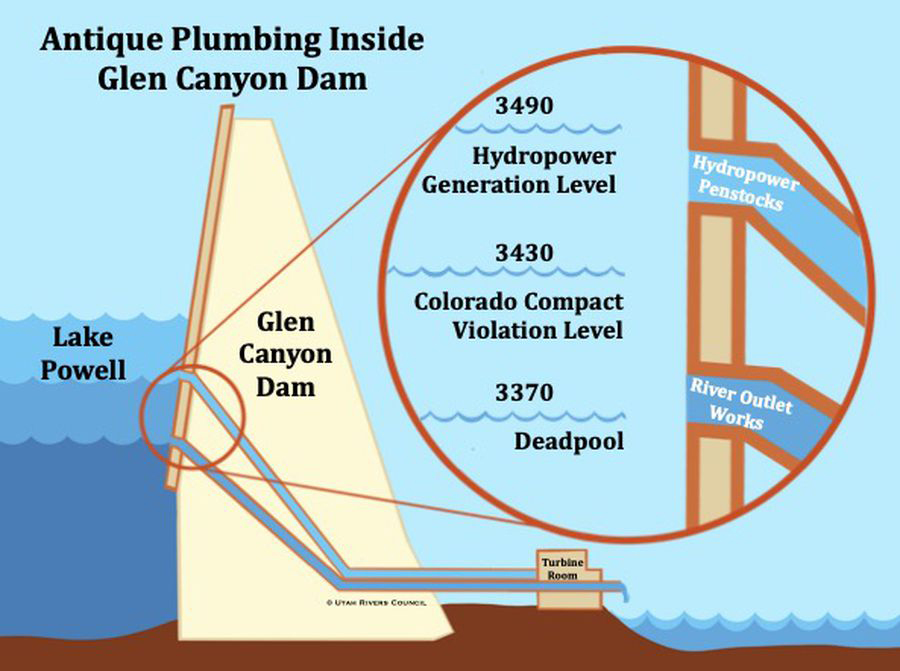 The report describes how Glen Canyon Dam, which creates Lake Powell—the second-largest reservoir in the U.S.—has two sets of outlets that allow Colorado River water to flow through the Grand Canyon and then onto Lake Mead, the country’s largest reservoir. The current level of Lake Powell is just one-quarter of its capacity and only about 45 feet above the upper outlets through which water flows to turn turbines that generate hydropower for three million people. But there won’t be enough pressure if the reservoir drops below 3,730 feet above sea level—something that could happen if there are two more dry winters.

There are smaller outlets at the bottom of the dam designed to allow supplemental releases when power generation outlets are not adequate, but the report warns that these lower pipes have only been used when the dam first filled or for some emergencies and may not function in the long term.

This plumbing problem could lead to Lake Powell becoming a “dead pool,” threatening water deliveries to farmers and cities, including Phoenix, Las Vegas, Los Angeles, and Tijuana. It could also cause harm to the Grand Canyon’s ecosystem. If Lake Powell becomes a dead pool, it will be impossible for the four Upper Basin states—Colorado, Wyoming, Utah, and New Mexico—to comply with the 100-year-old river compact with the three Lower Basin states. This possibility threatens the system as a whole, leaving California, Nevada, and Arizona with about half of what they currently receive.

The Bureau of Reclamation is studying options for the turbines, and the researchers warn that the agency must act soon to put in new outlets at the bottom of Glen Canyon Dam or expand the ones already there.

There have been calls by the Glen Canyon Institute among others, to send all the water held by Glen Canyon Dam downstream to Lake Mead.

"Rewilding" is a practice that returns land to natural conditions, and according to research from the UK Centre for Ecology & Hydrology (UKCEH), when used near farms, it can boost biodiversity without reducing crop yields. Over a ten-year period, researchers studied a 2,500-acre farm in southern England where several wildlife habitats were created from land that had been unprofitable or difficult to farm. The habitats had flowers for pollinators, seeds for birds, and grasses that supported small mammals and insects. The farm itself encouraged natural pest control. 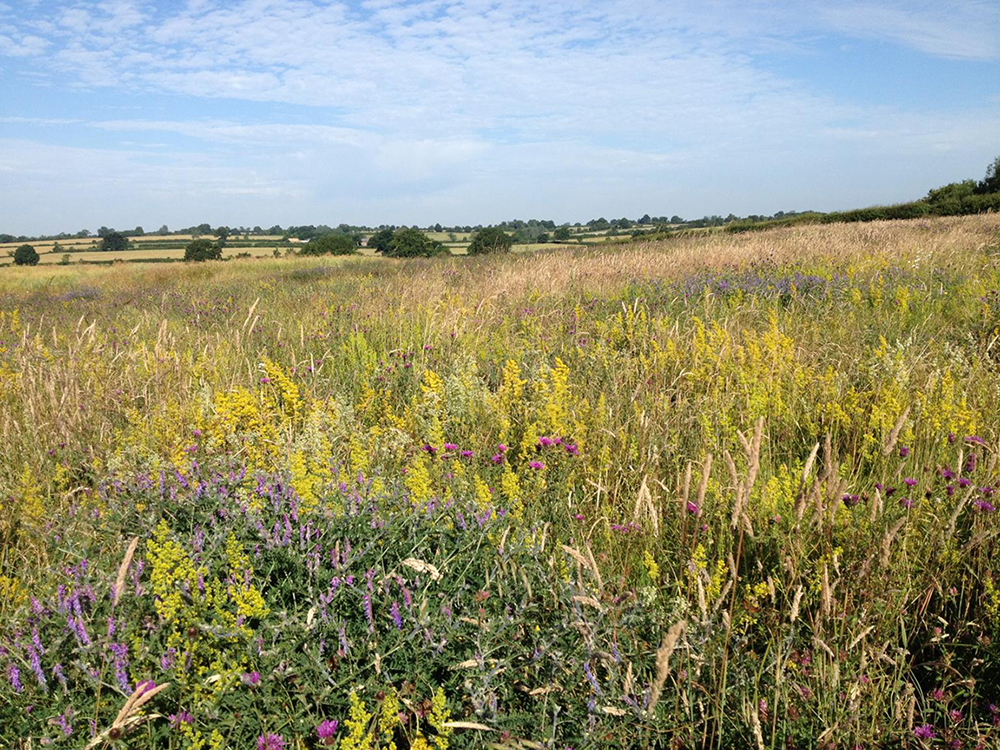 The researchers found that the number of species increased at the test farm and were much higher compared to other farms nearby without rewilded areas. The number of birds increased by one-third and butterflies doubled. And while all that was happening, crop yields were maintained and, in some cases, improved, which was significant, given the reduction in farmable land to create the habitats.

The Guardian reports that the results were contrary to claims by many politicians that these schemes would produce less food. Rishi Sunak, who is currently running for prime minister, said he would “protect the best agricultural land from rewilding to make sure they have minimal impact on food production.”

The study was published in the Journal of Applied Ecology.

Our appetite for electronics like smart phones and computers is generating a growing amount of waste when we toss outdated or broken devices. Some of this so-called e-waste can be recycled or repurposed but much of it ends up in landfills where toxic compounds leach into groundwater and soils.

A stencil-printed paper battery designed to spell out the name of the research institute ("Empa"). The battery can run low-power electronics such as the liquid crystal display (LCD) alarm clock connected to the battery. | Credit: Empa

One insidious stream of e-waste is batteries in low-power, single-use disposable tech like "smart" tracking labels, environmental sensors, and medical diagnostic devices. Researchers at the Swiss Federal Laboratories for Materials Science and Technology (Empa) wanted to replace these batteries with ones that would be nontoxic, sustainable, and biodegradable—so they made one out of paper. And to power it up, you just add water.

In a typical battery, there are positively and negatively charged poles—the cathodes and anodes respectively. Between the two is conductive material called an electrolyte. In their experimental battery, the team infused paper with salt and printed the front with graphite flakes to be the cathode and the back with zinc powder as the anode. Once the paper got wet, the saltwater acted as a conductor, and boom, it generated almost as much voltage as a AA battery for around an hour—potentially all that’s needed for many disposable items.

The researchers told Scientific American that their batteries could be in products within two to five years.

Earth Is Spinning Faster, and Tech Companies Don’t Want to "Leap" to Conclusions

Does it ever feel like there’s not enough time in the day? Well, technically, on June 29, there wasn’t. Earth's rotation was 1.59 milliseconds shy of 24 hours—the shortest day since scientists started keeping track with atomic clocks back in the 1960s, according to the National Physical Laboratory in England. And it wasn’t a fluke. July 26 was 1.5 milliseconds shorter than the total 86,400 seconds that make up a solar day. And it seems to be a trend. The site TimeandDate.com reported that, in 2020, Earth had 28 days that were less than 24 hours. 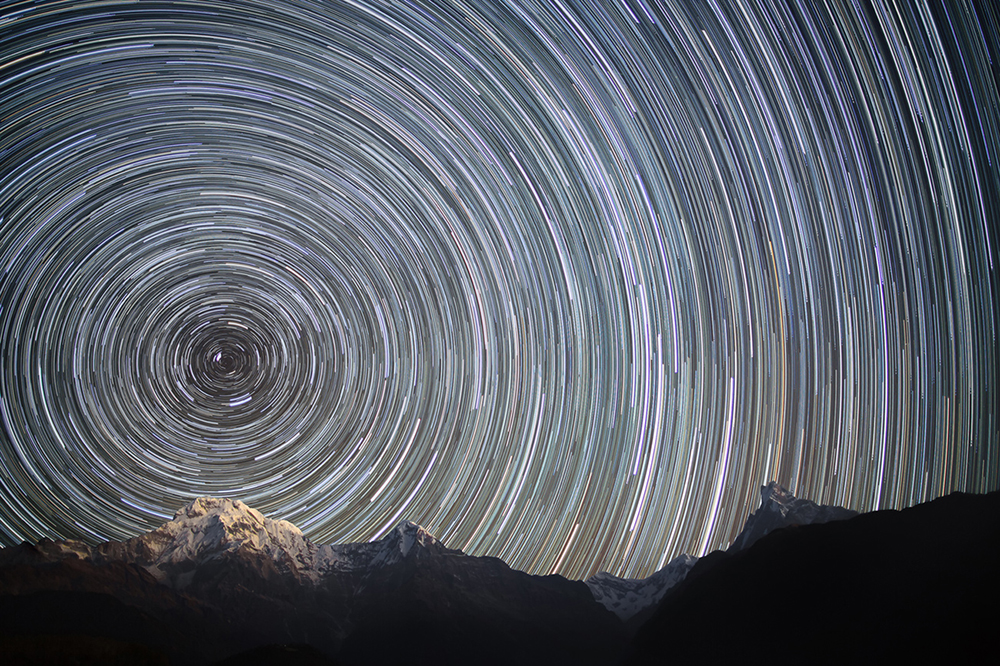 So, what’s going on? Scientists aren’t sure but offer potential explanations. Perhaps it’s from changes in the earth’s core, the constant tug of war between the earth and moon affecting tides, or maybe earthquakes and tsunamis moving the planet’s mass. Others theorize that because Earth isn’t exactly spherical, the north and south poles naturally shift their positions on the globe, called the 'Chandler Wobble.” According to NASA, even strong winds in El Niño years can slow the planet’s spin. Still other scientists say it could be from humans warming up the planet and causing ocean circulation patterns to change as ice caps melt and glaciers vanish.

As the Guardian explains, Earth’s rotation has slowed over geologic timescales. A billion years ago, a day was less than 19 hours. Days have gotten longer by, on average, around one 74,000th of a second each year. And so, in the modern era, world timekeepers at the International Earth Rotation and Reference Systems Service (IERS) have occasionally added leap seconds to sync our clocks with the sun. They’re always added to the world’s clocks at 23 hours, 59 minutes, and 59 seconds Coordinated Universal Time (UTC), on either June 30 or December 31.

But the agency said they won’t be adding one in December 2022, as planned. And there is even some talk about removing a second for the first time ever. That prospect has tech providers like Meta, Amazon, and Microsoft clamoring to end leap seconds all together, saying they wreak havoc on software that relies on precise time and are responsible for numerous outages in the past.