Too Little Water in California? How About Too Much.

People in California are aware that disasters like “the Big One”—a massive earthquake along the San Andreas Fault—are potentially in their future, but according to a new study, they should be preparing for something almost inconceivable—megafloods. 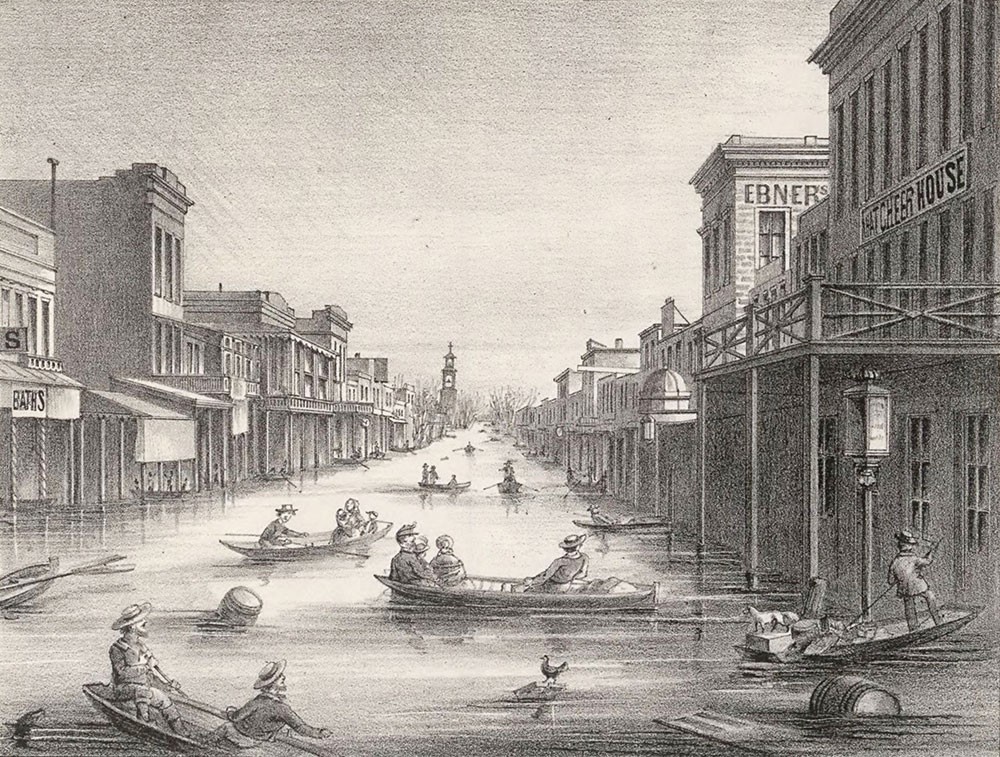 Greyscale lithograph of K Street in Sacramento, California, during the Great Flood of 1862. The flood affected the western U.S., from Oregon through California, and Idaho through New Mexico. | Credit: A. Rosenfeld/Wikimedia Commons

It might seem implausible as the state confronts a historic megadrought. Just last week, California Governor Gavin Newsom was announcing plans to boost the state’s water supply in the face of climate change. But global warming can also bring extreme weather events, and researchers from UCLA warn that floods hundreds of miles long and tens of miles wide could inundate Sacramento, Fresno, or Los Angeles.

The superfloods would be caused by atmospheric rivers laden with moisture that stall over California and are locked in place by low pressure in the northeastern Pacific Ocean. Warmer air holds more moisture that leads to major flooding as happened recently in St. Louis and Kentucky. A separate study last week showed that climate change will intensify such atmospheric rivers and make them up to three times more damaging in the U.S. West later this century.

Scientists say it’s not if but when these megafloods will occur in California, with the odds being much greater in winters dominated by El Niño conditions that have warmer ocean surface temperatures. Superstorms have occurred before in California. The Great Flood of 1862 covered the Central Valley with water 60 miles wide and 300 miles long. But at that time there were only 500,000 people in the whole state as compared to 40 million today.

One of the UCLA researchers, Daniel Swain, said that the future storm scenario includes stronger winds and more intense rainfall with up to 400 percent more runoff in the Sierra Nevada, where precipitation will fall as rain, not snow. It could cause devastating landslides and debris flows especially in areas scarred by wildfire. The researchers also warn about a storm lasting a month, dumping 30 inches of rain in San Francisco. Swain told the Guardian that their research has major public policy and disaster preparedness implications.

The study was published in the journal Science Advances.

Methane is a potent greenhouse gas—80 times more damaging in the short term than C02. It’s emitted from oil and gas operations and agriculture but also released from decomposing waste in landfills, where according to a new study—quantities are larger than previously thought. 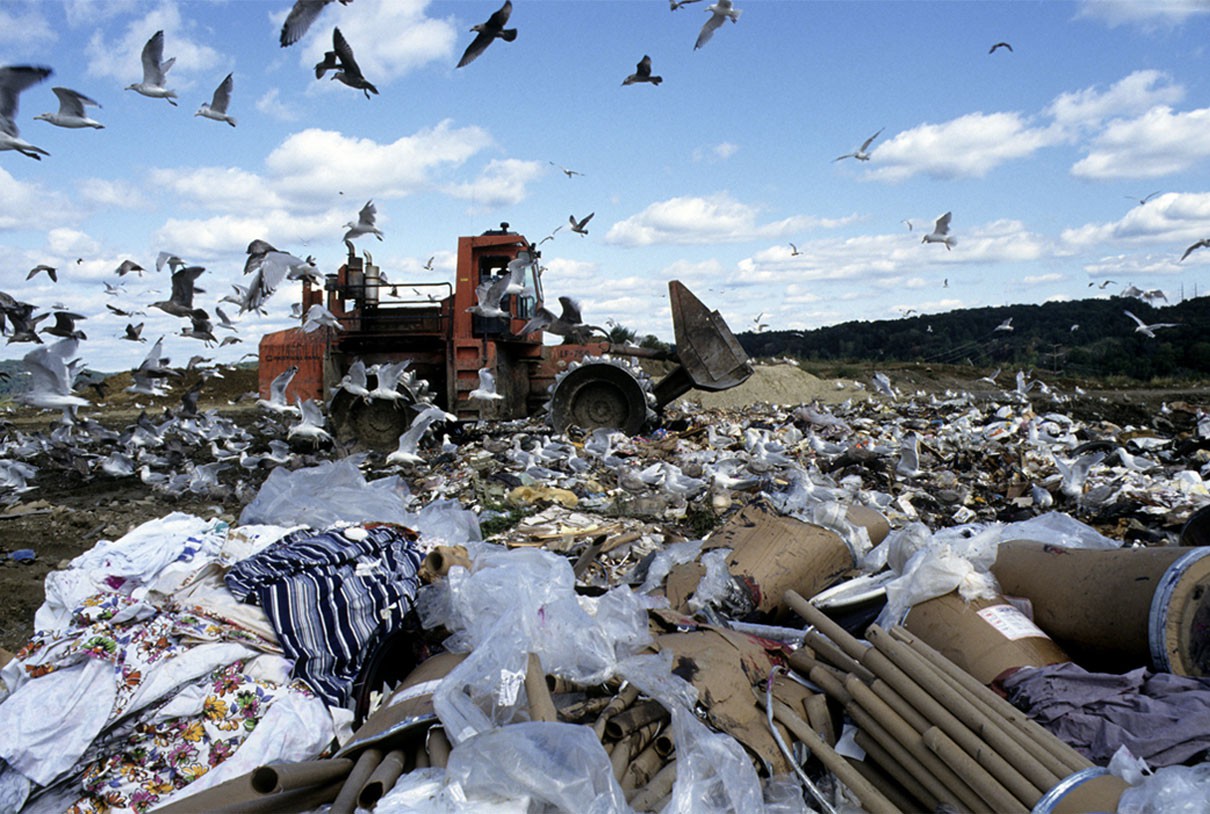 Scientists at the SRON Netherlands Institute for Space Research used satellites to collect data that show some landfills release tons of methane each hour, with ones in Buenos Aires, Argentina, Lahore, Pakistan, and New Delhi and Mumbai, India, emitting almost three times more than earlier estimates. A landfill in Buenos Aires had a climate impact equaling 1.5 million cars. The World Bank figures that landfill waste makes up over ten percent of global methane emissions and expects that to increase by 70 percent in less than 30 years.

But according to one of the researchers, the problem can be solved with relatively little effort by separating and composting the organic waste. Composting uses oxygen to prevent methane-producing microbes from creating the gas, but in landfills where the waste is buried, the microbes can thrive.

Methane is increasingly becoming a problem in the fight against global warming, according to the National Oceanic and Atmospheric Administration. China and India are the world's biggest methane polluters, according to a recent analysis by the International Energy Agency. In the U.S. a recent investigation showed that there are hundreds of super-emitting methane oil and gas sites in the Permian Basin of Texas and New Mexico.

The study was published in the journal Science Advances.

Effort to Save and Restore "Old-Growth Grasslands"

Old-growth forests are invaluable for their ability to trap and store CO2, clean air and water, and provide habitat. But they’re not alone in their remarkable attributes. Have you ever heard of "old-growth grasslands"?

Researchers led by the University of Colorado, Boulder, want us to pay more attention to these oft-overlooked areas, which sequester about one-third of all carbon stored on land, are home to a range of diverse species and are more resilient than forests to fire, heat, and drought caused by climate change. Their work was published in the journal Science, in a special issue on grasslands.

But ancient grasslands worldwide, from prairies to savannahs, are imperiled, having been converted into farmland, used to grow trees, or developed as cities expand. And like old-growth forests, pristine grasslands take centuries to restore, if at all, so what remains intact needs to be protected. Furthermore, despite popular efforts to plant trees as a climate solution outlined in the United Nations Decade on Ecosystem Restoration, which aims to restore degraded ecosystems and help achieve the Sustainable Development Goals of the Paris Climate Agreement, the study’s authors warn against growing trees in native grasslands, lest they destroy more than they create.

Luckily, there might be momentum to protect grasslands. In late July, Senator Ron Wyden of Oregon introduced legislation to establish the North American Grasslands Conservation Act of 2022, to protect, restore, and manage these vital ecosystems. Given that 85 percent of grasslands in the U.S. are privately owned, the act would empower ranchers, farmers, and Tribes as stewards to improve biodiversity, support habitat connectivity, and protect watersheds—all while increasing sequestration to confront the climate crisis. Senators Michael Bennet of Colorado and Amy Klobuchar of Minnesota co-sponsored the bill.

Food for Thought: Science Says Healthy Foods Are Good for the Planet

If you buy healthy food at the grocery store, you’re doing a solid for the planet. A new study from Oxford University found that nutritious foods tend to be more sustainable and environmentally friendly than other choices. 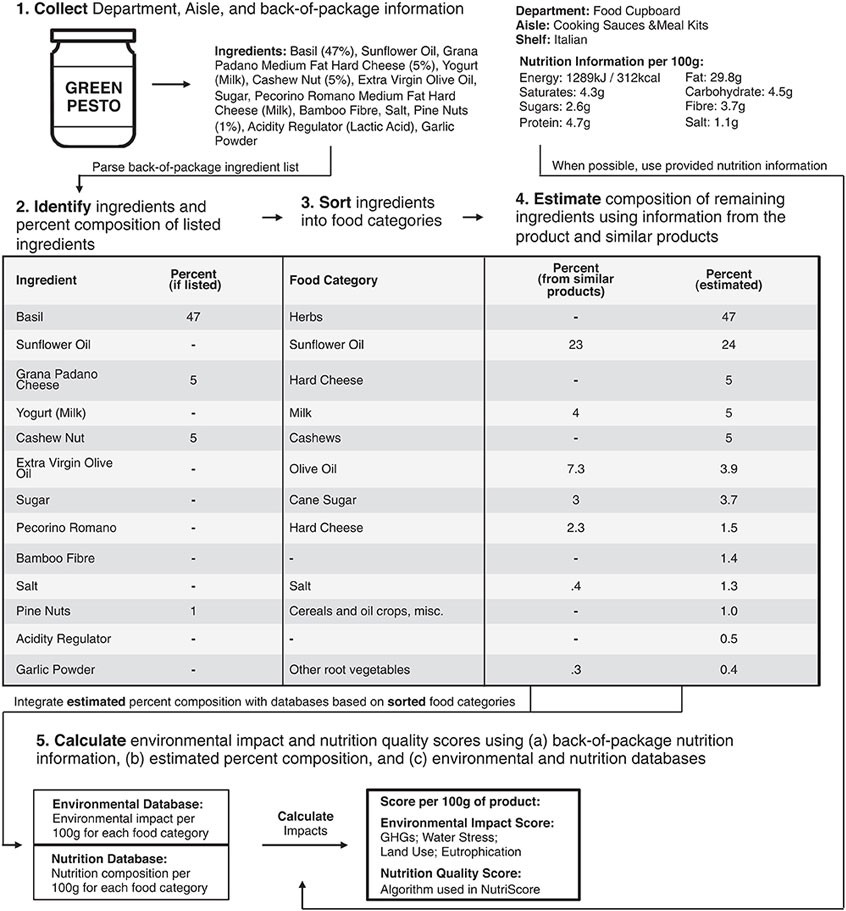 But when you pull a product off a store shelf, it might be hard to determine its environmental footprint from its package. So, researchers looked at more than 57,000 food items to build a database of individual ingredients and ranked them by environmental impact, such as greenhouse-gas emissions, land use, and water stress.

They then overlaid the nutrition quality in terms of calories, salt, saturated fats, sugar, protein, and fiber. Foods that were healthy and good for the planet tended to be made with plants and included fruits, vegetables, breakfast cereals, some breads, and meat alternatives like tofu or vegan sausages.

As reported in the journal Nature, there were some surprising exceptions—both nuts and seafood were nutritious but had relatively high environmental footprints. The team found that foods containing lamb and beef had the most serious environmental impact, scoring up to three times worse than options made with poultry.

Also, in the lose-lose category for sustainability and health were cheese and chocolate. So, fondue? Maybe fon-don’t.