No High Seas Treaty to Protect Marine Life Yet, But There’s Still Hope

Last week, diplomats from around the world met at the United Nations attempting to reach an agreement on how to protect our planet’s ocean in a fifth round of talks. The waters at stake are the high seas that begin 200 nautical miles off the coast of each country. Currently, only about one percent are protected from things like plastic pollution, abandoned fishing gear, overfishing, and the effects of climate change. 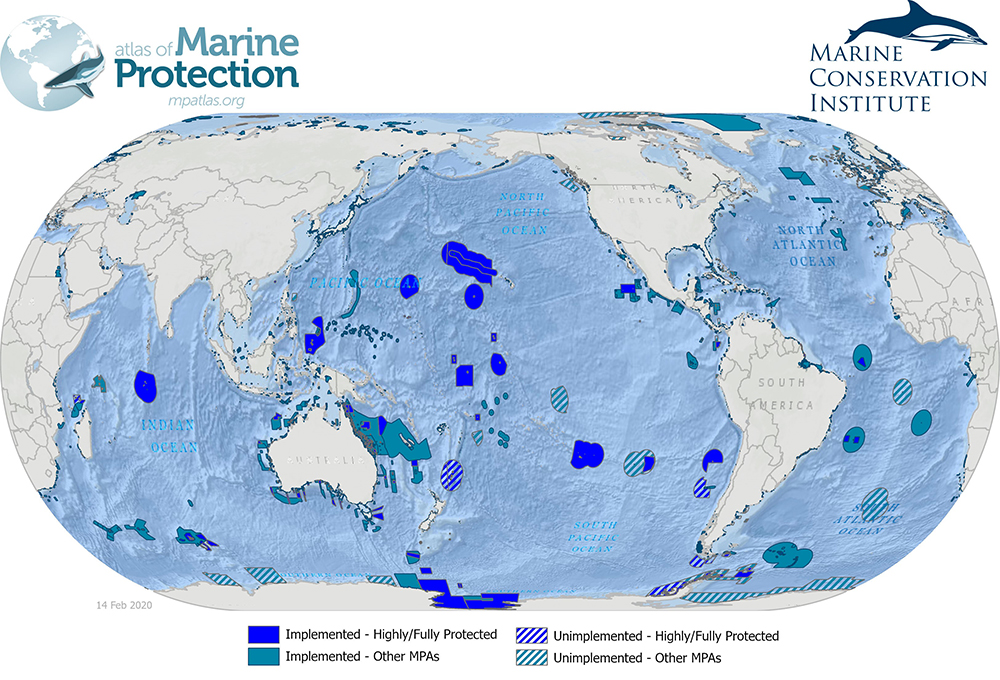 A major goal of a treaty is to create marine protected areas covering 30 percent of the seas for long-term conservation of biodiversity, but disagreement remains over how to create them and how to share the benefits from marine life. Biodiversity is more than preserving whales and turtles—it includes conserving microbes in the seas that produce half of the oxygen in the atmosphere. In fact, by weight, Al Jazeera reports that ninety percent of the life in oceans is microbial.

According to Greenpeace, richer countries, including the U.S. and Canada, have delayed reaching a treaty. Only on the last day of the gathering was there some progress on sharing resources derived from marine plants and animals that could be used, for instance, by pharmaceutical, chemical, and cosmetic companies. Agence France-Presse reports that research into those uses is costly, and developing nations don’t want to be left out of profits derived from the ocean. In addition, Russia has refused to engage in the process, much less attempt to reach a compromise on a wide range of issues.

Liz Karan of the Pew Charitable Trusts said she remained encouraged by the progress that was made during the two weeks of negotiations, even if a treaty wasn’t finalized, and she’s hopeful a new session of the UN can be called by the end of the year.

Talks on opening deep-sea mines ended earlier this month, also without any agreement, and as the Guardian reports, that means that in less than a year, mining of the ocean’s floor could start without any regulations and threaten marine life.

Which Is More Productive—City Farms or Rural Agriculture?

If you had to guess, which do you think could produce more lettuce—a rural farm or an urban garden? That’s exactly what researchers at the University of Lancaster in the UK set out to learn, and it turns out that urban farming produced up to four times more per square meter of some crops than conventional agriculture, including leafy greens, cucumbers, and tubers. 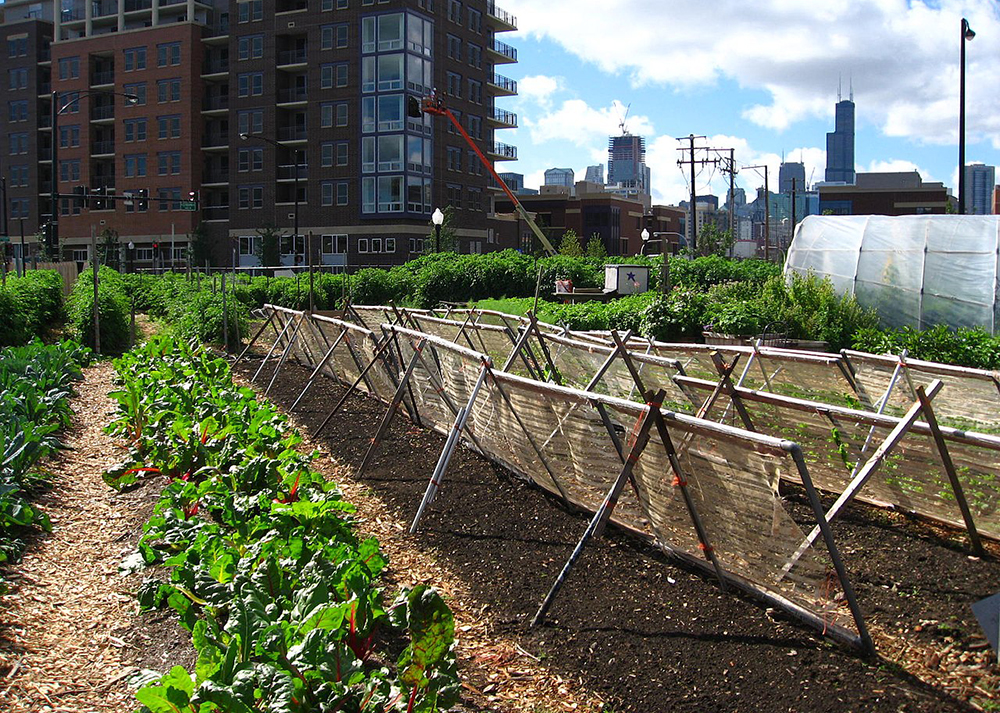 The researchers estimate that up to 20 percent of food is produced in cities, and as their populations boom, urban agriculture will be not only an important source of food, but also a way to fight inequitable access and food deserts.

The study also compared growing crops in cities inside and outside, and they found there were few differences in yields. However, some crops like lettuces, kale, and broccoli are more naturally suitable for growing vertically inside than others. Tomatoes and leafy greens did well when grown using hydroponic methods that can be stacked on top of each other.

The study doesn’t answer the question of why urban agriculture may produce more; however, growing and harvesting crops inside can be done throughout the year, which results in higher annual yields than open-air environments whether in the city or the country. The authors also speculate that higher yields in urban areas may be due to those farms not needing the space for large farm equipment to pass over.

They say there are at least three issues remaining to study—the cost effectiveness of urban farming, its carbon impact, and the effect of pollutants on nutritional value. The researchers are part of an interdisciplinary team called Rurban Revolution, which is studying the growing of food in urban areas for food security, health, and the environment.

The study was published in AGU’s Earth’s Future.

Wind farms are spreading around the globe, which is huge toward getting us to a clean energy future. But the wind turbine blades themselves have only about a 20-year lifespan and also new larger and more efficient blades at sea are coming online that can generate more electricity. That means lots of old blades are ending up in landfills—not a good look for a green industry—but what are you supposed to do with a piece of fiberglass the length of half a football field that’s not easy to transport or recycle? 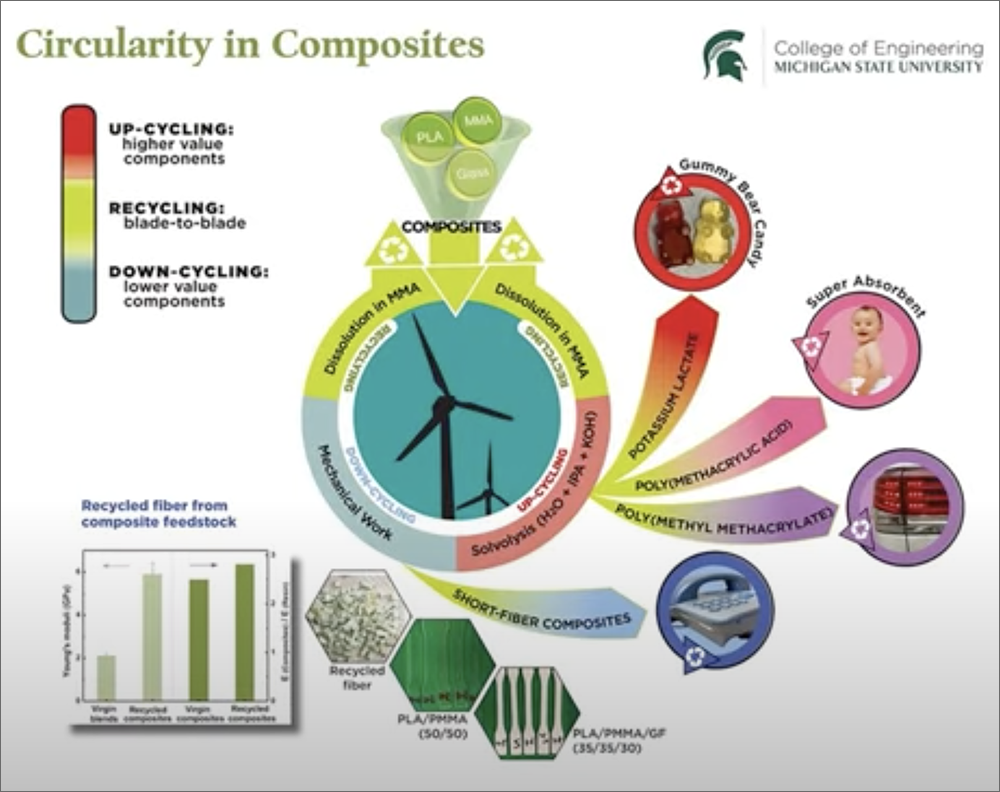 If you’re John Dorgan, a chemical engineer at Michigan State University, you turn blades into…gummy bears. That’s one potential use of a new type of resin his team developed to make fiberglass for turbine blades. The difference is, once a blade made with his resin completes its lifespan, the resin can be dissolved to make new blades or mixed with other materials to create consumer goods—from kitchen counters to windows.

And, as Scientific American reports, cooking the resin at high temperatures produced a superabsorbent polymer often used in diapers and, with a little more processing, the resin was converted into potassium lactate—a common food preservative, which the team turned into the candy bears. It’s a sweet way of showing how wind turbine blades, which go round and round, could one day be part of a circular economy.

The research was presented at the fall meeting of the American Chemical Society (ACS) last week.

“Air Traffic Control” for Ships? It Could Stop a Lot of CO2 Emissions

Ever since the “Age of Sail” between the 16th and 19th centuries when global trade was dominated by galleons and clipper ships, vessels have operated from the same maxim: SFTW—“Sail Fast, Then Wait.” To this day, ships book it to their destinations without any regard for local conditions, only to idle offshore until a berth becomes available, wasting fuel and generating toxic emissions. 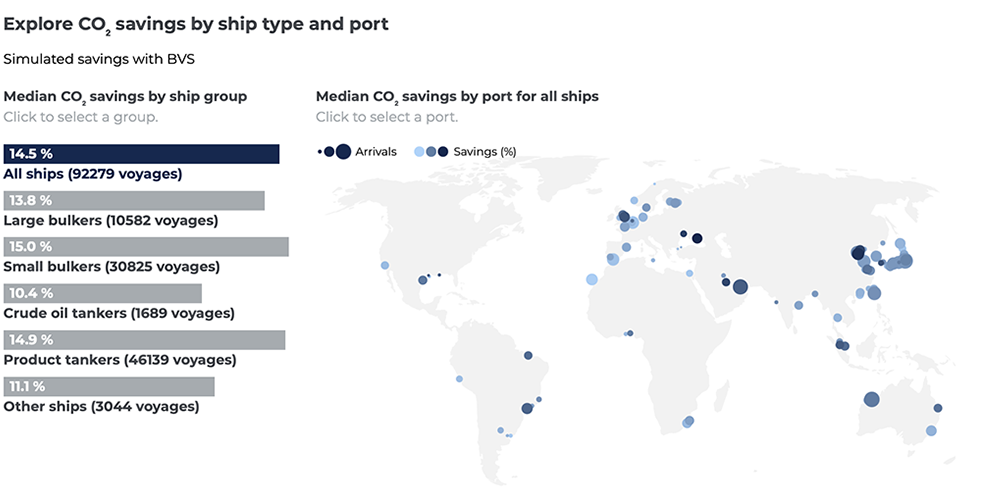 But a consortium called Blue Visby Solutions, whose members are from the shipping industry, government, finance, and environmental organizations, including, Anglo-American, Carbon Trust, ClassNK, CMB, Drewry, Ocean Conservancy, Lloyd’s, the UK Hydrographic Office, the University of Manchester, Tankers International, and Vertis, wants to change SFTW by creating a type of air traffic control for ships.

It has developed software that optimizes arrival times for vessels by comparing their profile with other ships headed to the same destination. It factors in port congestion as well as environmental conditions like weather, currents, swell, bathymetry, and tides. The program algorithm, still in BETA mode and set to launch in 2023, would allow ships to slow down to cut fuel consumption—and emissions—but still keep their spot in line at the port. This benefits the climate as well as shipowners who save on costs with more efficient journeys.

The developers say their platform could potentially reduce the carbon footprint of the maritime industry by about 15 percent and has the potential to slash emissions from the global shipping fleet by more than 60 million tons of CO2 per year—larger than the total amount released by Norway, according to NAPA, the technology provider for the consortium. Also, according to Blue Visby’s website, independent research shows that adoption of their solution would reduce underwater noise pollution by 45 percent and lower the risk of striking whales and other sea life by 40 percent. Sounds like a no-brainer for the shipping industry to stop SFTW, ASAP.