Lake Mead Drops to Low Level as the West Aridifies

The serious drought in the U.S. West continues. According to the U.S. Drought Monitor, extreme and exceptional conditions—the two worst categories—expanded in Colorado, Arizona, and New Mexico. The agency’s map shows most of the western half of the country to be dry, except for parts of the Northwest. 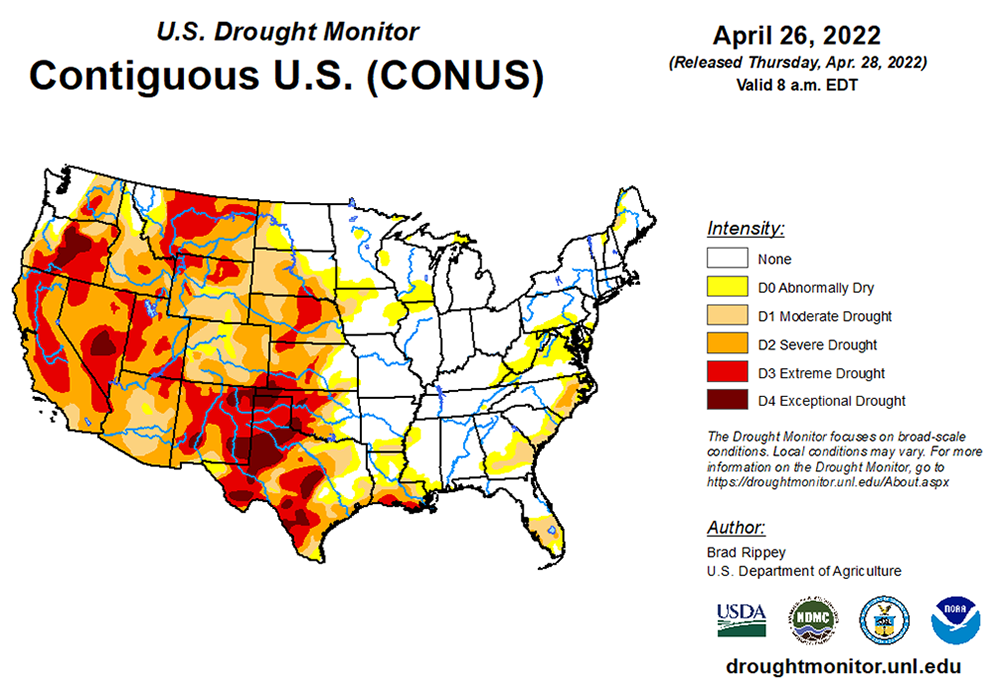 According to water experts, the West is undergoing a transition to a much drier climate, which is called “aridification,” in contrast to “drought,” which gives the impression that wetter conditions will return. A recent study published in the journal Nature Climate Change shows that it’s drier now than in the past 1,200 years.

Starting June 1, one of the largest water providers in the U.S., the Metropolitan Water District of Southern California, will limit outdoor watering to just one day per week for the six million residents of Los Angeles, Ventura, and San Bernardino counties. A spokesperson for the District said that the first three months of this year were the driest in the state’s history for rain and snowfall.

The nonprofit news outlet Cal Matters reports that in the past two years, per capita residential water use in Southern California has increased, even though authorities have warned of the severe conditions. If consumption does not go down, all outdoor irrigation could be banned as soon as September.

Restrictions, although less severe, are also contemplated in Northern California, where 1.5 million people of the East Bay in the San Francisco Bay Area will have to limit landscape irrigation to no more than three days a week.

The dryness has officials worried about wildfires. In New Mexico, over 170,000 acres have burned—more than the state has seen in seven of the last eight years, with conditions expected to worsen.

Study: Climate Change Could Lead to Mass Extinction in Oceans

The climate crisis is causing such dramatic changes to the oceans that a mass extinction of marine species could occur, the likes of which have not been seen since the age of the dinosaurs.

The researchers compared their model to the magnitude of Earth’s “Big Five” mass extinctions. The illustration above indicates the percentage of biodiversity lost during each event (left). At lower right, the loss of marine life from the present to 2300 is projected for high- and low-greenhouse gas emissions scenarios with the accompanying global temperature change. | Credit: Data by Justin Penn and Curtis Deutsch with illustrations by Yesenia Román

A new study from Princeton University found that, if greenhouse gas emissions are not curbed, species in polar regions would be at the greatest risk for extinction and tropical waters would experience the greatest loss of biodiversity.

Global warming has led to changes in two key factors—water temperature and oxygen levels. Warmer water threatens animals that are adapted for cooler climates and it also holds less oxygen as it acidifies from absorbing CO2. Some marine life in the tropics may be able to cope better with warmer waters and might be able to migrate to more suitable habitats. However, the authors said tropical regions are already so warm and low in oxygen that more climate change may make it uninhabitable for many species. Creatures that live in polar regions are more at risk because they don’t have cooler places to go.

Biodiversity increases in the oceans from the poles to the tropics, but it drops off at the equator. The authors say that this is because oxygen is too low in these waters for some species to tolerate. Their big concern is that global warming will make large areas of the ocean similarly uninhabitable.

Right now, there are bigger risks to marine species than climate change, such as overfishing, transportation, urban development, and pollution. However, climate change could soon surpass all those stressors combined.

Speaking to NBC News, one author of the study, Curtis Deutsch, said that there is strong sentiment among the public that it’s too late to avoid this extinction, but that’s not what their results show. Instead, by limiting global warming to 2 degrees Celsius, a target of the Paris climate agreement, the severity of extinctions would be lowered by more than 70 percent. He added that there’s still time to preserve the diversity the oceans have built up.

A Concrete Solution to Mask Waste

Concrete is a major component of everything from roads to bridges and buildings because it’s relatively cheap, simple to make, and strong. But production of cement—its key ingredient—is carbon-intensive and responsible for as much as eight percent of global greenhouse gas emissions. 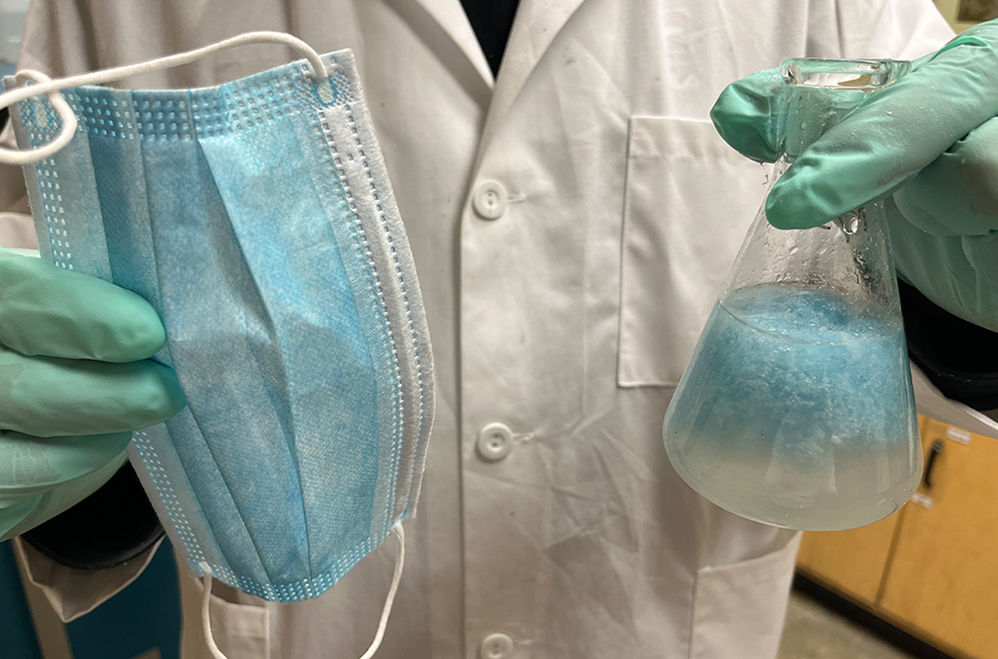 The WSU researchers developed a process to fabricate tiny mask fibers, ranging from five to 30 millimeters in length, and then added them to cement concrete to strengthen it and to prevent its cracking. | Credit: Washington State University

Researchers at Washington State University wanted to address concrete’s climate contribution while also tackling a growing waste problem—the number of disposable masks piling up in the environment because of the COVID-19 pandemic. The team found that by chopping up old masks—which are layers of polypropylene and polyester fibers—and incorporating them into a cement mixture, it created a stronger, more durable concrete that was less prone to cracking. In a paper published in the journal, Materials Letters, the team showed that the mixture using mask materials was 47 percent stronger than commonly used cement after a month of curing.

In their study, the researchers coated the mask microfibers with a graphene oxide solution, which helped prevent tiny fractures in the cement from becoming cracks, which could cause the concrete to fail. Microfibers are already sometimes added to concrete to strengthen it, but they’re expensive so not often used. But the researchers say having mask fibers in the mix reduces the amount of cement needed for a project and makes the concrete last longer, reducing carbon emissions and cost.

The researchers’ next step is to study whether the concrete can handle frost and deicers used on roadways. Looking forward, they would also like to see the technology applied to waste such as discarded clothing to incentivize recycling.

The four winners of the inaugural Terra Carta Design Lab awards were announced last week in London. The competition, which was launched by Prince Charles as a part of his Sustainable Markets Initiative (SMI), challenged design students to develop high-impact, low-cost solutions to the climate crisis. The SMI is a network of global CEOs across industries—a “Coalition of the Willing”—working together to build prosperous and sustainable economies that generate long-term value through the balanced integration of natural, social, human, and financial capital. 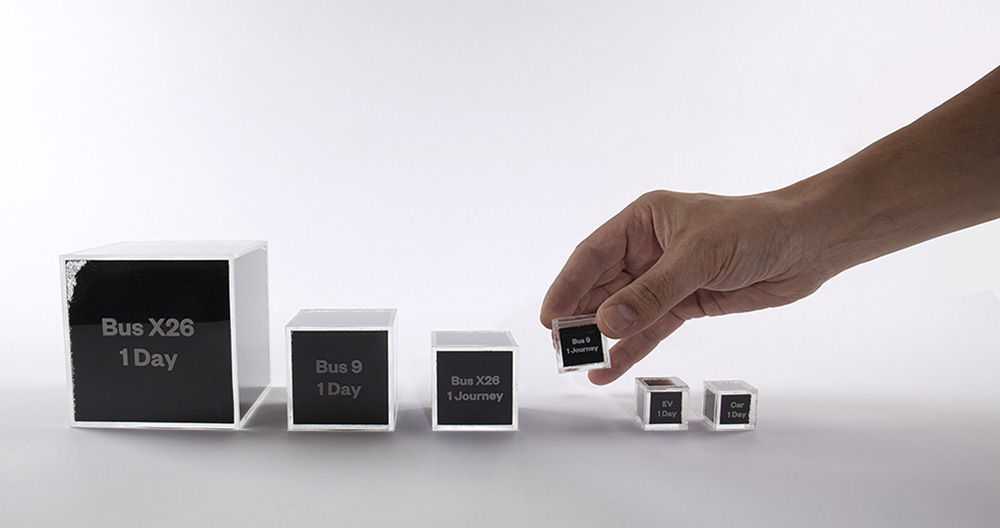 The image shows the amount of tire wear produced by London Buses, EVs, and cars. The No. 9 London bus, on average releases 4.65g per journey and a total of 65g a day. Car and EV quantities based on a 16km UK average commute per day. | Credit: The Tyre Collective

One winner, called “Zelp,” which stands for Zero Emissions Livestock Project, designed a harness for cattle to capture and neutralize methane the animals exhale and burp. The team claims the device, which slips over the animal’s head, can reduce emissions by 60 percent.

Another award-winning team, The Tyre Collective, set out to address microplastic pollution from vehicles. As we drive, tires shed bits of material every time we brake, accelerate, or turn a corner. The particles can be inhaled as they become airborne or are swept into waterways. Although electric vehicles (EVs) don’t have tailpipe emissions, their tire wear is likely greater due to the added weight of batteries. The team—a group of students studying Innovation Design Engineering at the Royal College of Art and Imperial College London—created a device that attaches to a wheel hub and captures 60 percent of particulates. With the roughly $60,000 in prize money, the group aims to develop a closed-loop system to upcycle some of the microplastic fragments into new tires.

The fourth winning team created a solution called Aerseeds, which are seed pods made from food waste that can be carried by the wind to deliver nutrients and seeds to soils to quickly reforest and restore areas that have been degraded by human activity.